In the 14th century, Italian poet Dante Alighieri wrote  The Divine Comedy, his theological trilogy on the fate of the soul after death. Inferno, the first book of the series, describes in gruesome detail the punishment doled out to the sinners condemned to one of Hell’s nine horrifying circles. In the lowest circle, we find Judas Iscariot, where Satan is gnawing on his head and clawing his back. It is a terrifying image, and one that deeply disturbed playwright Stephen Adly Guirgis as a child.

“If I can forgive someone,” Guirgis wrote in an interview with the Telegraph about the West End premiere of Judas Iscariot, “why can’t God, who was supposed to be all loving? That was the beginning of the end of my Christian experience.” It is an extremely disturbing prospect that anyone could be beyond the potential for redemption. 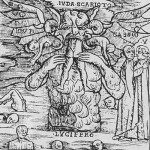 ‘The Punishment of Judas Iscariot’, a woodcut from a 1512 edition of The Divine Comedy. Scanned from Witchcraft, Magic & Alchemy by Grillot de Givry.

It begs the question: Why do we punish those who need our forgiveness most?

The evidence is worldwide. The Gaza Strip. North Korea. The Boston Marathon. The War on Terror. We put up walls, try to separate the good from the bad, the wheat from the chaft, or, to use a biblical parable, the sheep from the goats.  This attitude just begets more anger, more misunderstanding and violence. Both sides twist religious and secular rhetoric in order to dole out punishment and justify terror.

But there is Hope (which, incidentally, is where the three hours traffic of our play takes place). Religion is undergoing a spiritual renaissance worldwide, and it offers us the opportunity to re-evaluate our moral priorities. It is no coincidence that the last three shows in our Studio season revolved around religious themes: a new era of spirituality is dawning, and it heralds with it the possibility for the religious and secular citizen to come together in a mutual embrace of understanding and acceptance.

Through The Last Days of Judas Iscariot, Stephen Adly Guirgis reminds us that our work on this earth has barely begun. He demands that we become better human beings. To truly communicate. To understand what it means to live in a shared community.To celebrate difference.And most importantly, to forgive one another.

Take up the task.

Simon Bloom is a director, dramaturge, and a founding member and artistic co-director of the Toronto based theatre company Outside the March. Simon holds a BA from the University of King’s College in English and Theatre, and is currently completing the second year of his MFA in Theatre Directing at the University of Alberta.  Recently, he directed Hannah Moscovitch’s East of Berlin at UAlberta. Other directing credits include Sexual Perversity in Chicago (Edmonton Fringe), Ed’s Story (National/International Touring), Splinters (Merritt Nomination, Plutonium Playhouse), Oh, the Humanity! (Canadian Premiere, Outside the March).

The Studio Theatre production of The Last Days of Judas Iscariot is directed by Simon Bloom as his MFA Directing thesis production. See it at the University of Alberta’s Timms Centre for the Arts, May 16 through 25, 2013.

The Meaning of Art