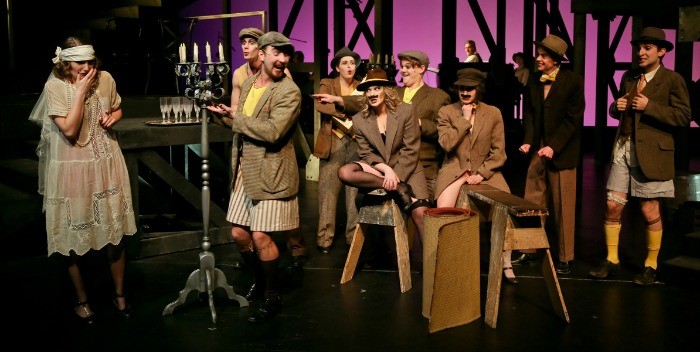 The Threepenny Opera is, undoubtedly, Brecht’s most celebrated play. Mounted more than 10,000 times, translated in more than 18 languages and performed all over the world, Brecht’s masterpiece remains a universally entertaining show.

The success of The Threepenny Opera is largely attributed to the play’s music. Written by Bertolt Brecht and Kurt Weill, the songs were, and still are, covered by talented singers. “Mack and the Knife”, the most popular song of the play, became famous in the United States in 1956 through Louis Armstrong’s interpretation and, since then, many artists such as Bobby Darin, Frank Sinatra and more recently Michael Buble have performed their own versions of the song.

Is this success just a matter of fortune? Nikki Hulowski (playing the part of the notorious Jenny) and Natalie Davidson (street singer) don’t think so.  These two promising actors in the Studio Theatre

production of The Threepenny Opera reveal the secrets of its lasting popularity.

Natalie: “The play’s sexy and dangerous aspect is what makes it so catchy. This is a reflection of our capitalist society where the people who exploit their iniquities become successful. The character of Mack the Knife perfectly fits this description: he is beloved because he is good looking and attractive, but really he is a terrible person.”

Sexy and dangerous are not only aspects of the play but also characteristic of Nikki.

The actor who interprets the fiery Jenny tells us about her daring side: “I love adrenaline. I am trained in the use of weapons like guns and knives and I grew up hunting.” Nikki believes that “the ingredients that make The Threepenny Opera immortal are similar to the ones that Shakespeare used: love, greed, lust, and betrayal.”

Nikki also comments that, “The rhythmic nature of the songs allow singers to play.”

Natalie agrees: “It is a very well written piece of opera; the music is repetitive enough that jazz artists gravitate towards it because it is easy to play within the structure, while also creating their own sort of thing.”

If The Threepenny Opera is so successful for its sexy and dangerous aspects, the Shakespearean ingredients and the potential for wide interpretation of the music, we hope that these elements will pave the way for Nikki and Natalie, bringing them a lot of success.

Daunia studied drama at the Academy of Teatro Cristallo in Trieste, the Italian Academy in London and Bat Improv School in San Francisco. She graduated with a major in Art of Communication from the University of Trieste. She performed from 1994 to 2001 with Teatro degli Asinelli in Trieste. While residing in France, she discovered “Business Theatre” (a new concept of corporate training that employs Theatre).

Upon returning to Italy in 2005, she opened “Teatro dell’Eco”, a company modeled on the business theatre concept. She has been the artistic director for 7 years, writing dramas, acting and directing. In 2012 she moved “Teatro dell’Eco” from Italy to Edmonton where she is now based. In 2013 she founded a new company, “Teatro dell’Eco” based in Edmonton. She partnered with Nino Signore and his “Dramanation” theatre company. Together they have written, directed and performed Greek Chopsticks on Spaghetti Tales and The Nino and Nina Show. She wrote, directed and performed The Importance of Garlic and Notes from the Sky. Since 2013, Daunia has taken part in four Edmontonian Festivals with her productions. She will debut in spring at Citadel Theatre with a new play called The Garpires