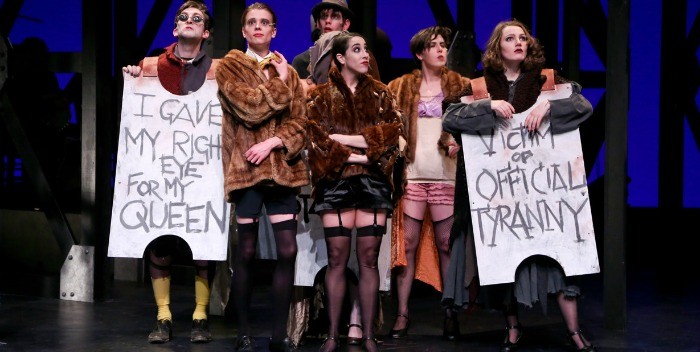 Aside from his innovations on the stage and vibrant, socially minded commentary, Brecht is equally known for his theatre theory and his vision for theatre to evolve into a tool for political change. As a committed Marxist, Brecht intended the theatre as a space where the everyman could develop a critical understanding of the oppressive bourgeoisie and act to shift the balance of power.

Unfortunately, Brecht’s own productions were largely unsuccessful in delivering the kind of political results he theorized about. Plays like The Threepenny Opera were embraced by bourgeois spectators, who were not very offended by Brecht’s criticism of them. In fact, Brecht has become one of the most commercially successful brands in theatre around the world today.

Brecht’s theoretical writings have, however, inspired many a social activist to create theatre with the purpose of undoing repressive systems. Away from the commercialism and fetishization of theatre in the developed world, Brechtian theory has left an indelible mark on performance in many parts of the third world. The immediate necessity to empower citizens against violent oppression has allowed for Brecht’s ideas to be adapted, resulting in the creation of populist, social action-oriented forms of theatre.

A prime example of Brecht’s legacy is the work of Augusto Boal in Latin America. Boal was dedicated to creating grassroots left activism in Brazil in the 1960’s. Soon exiled to Argentina because his theatre was seen as a threat by the new Brazilian military government, Boal began to develop a unique genre of performance that involved the spectator taking charge of the play’s action. This became popularly known as ‘forum’ theatre, and was noticeably Brechtian in its concept and execution.

In a forum theatre piece, the audience is seated quite close to the performers, who enact a tableau of everyday social oppression. Audience members are then invited to participate in a re-enactment of the scene, and they can substitute themselves for any of the characters. When the scene is played again, the participants are free to change the situation from one of oppression to one of liberation.

The effect of an audience member actually participating in a scene to undo its oppressive nature lends them a certain agency in social change. Forum theatre thus achieves the ultimate Brechtian goal of audience involvement and interaction, transforming their status in performance from passive spectators to dynamic ‘spect-actors’.

The Secrets of The Threepenny Opera’s Success