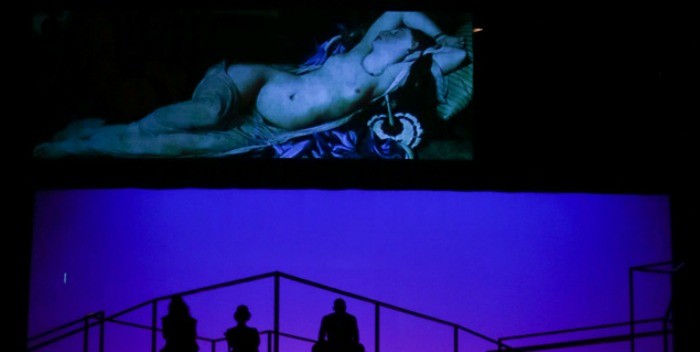 There are certain strict criteria for set design in Brecht’s Epic Theatre, which present themselves most notably in The Threepenny Opera. The stage is emptied of anything magical, including elements considered representative or symbolic. Brecht’s idea of design is the antithesis to our more familiar ‘kitchen sink drama’ in which the audience can “hang up their brains with their hats in the cloakroom” (Brecht 27). The fourth wall is dispensed with, allowing for actor – audience interaction, and set changes are made in full view of the audience. Props are kept to a minimum and are always functional. Brecht also makes use of a half curtain to dispel the illusions of the theatre.

Epic lighting makes it clear that the audience is watching a play, and the usual theatrical experience of being transported to another place or time does not occur. The lamps often flood the stage with a harsh white light, once again removing any reference to realism.

One of the key aspects of performance is presence; being in the moment. Brecht takes this to the extreme and elevates presence for both the audience and performers. The idea of being transported is too convenient, and allows the audience to sit passively on the other side of that fourth wall, unengaged.

Robert Shannon’s set design for the Studio Theatre production of The Threepenny Opera employs a number of these aspects.

“The design is a machine for putting on the play,” says Shannon. “The space is industrial and a framework for the action. We watch the performers create their impression of Dickensian London. The band is in full view. Projections are included as well as slogans of the beggars and maps of London. All in keeping with Brecht’s Epic Theatre design concepts that require a certain engagement of the audience.”

So, don’t sit back, relax and enjoy the show. Come, get amongst it and have yourself an experience.

Sherry has worked across Canada as an actor, director, writer and producer for over thirty years. She is a graduate of the National Theatre School of Canada, and the co-founder of LunaSea Theatre Company in Halifax, NS. In 2008, she received the Merritt Award as Best Actress for her role as Winnie in Beckett’s Happy Days. Sherry’s credits include six years in the acting company at the Shaw Festival of Canada, as well as writer of the one woman show, Woman of Labrador: The Elizabeth Goudie Story, a portion of which has been published and taught in Atlantic Canadian high schools. She was President of ACTRA Maritimes for four years and sat on the Board of Woman in Film and Television – Atlantic for two years. Currently she is a first year candidate in the MFA Voice Pedagogy program at the University of Alberta.