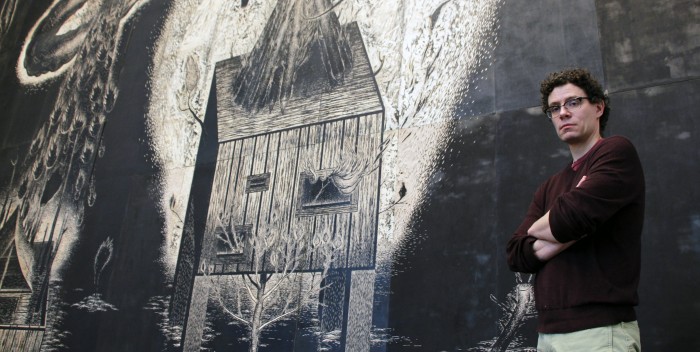 Sean Caulfield’s The Flood, recently installed in Manning Hall at the Art Gallery of Alberta, is as imposing in size as it is a feat of creative realization. At six-by-nine metres, it is Caulfield’s largest print to date, but to call it a print is misleading. It is the negative of the print — the carved and inked maple woodblocks — that have taken to the gallery’s wall.

When AGA’s curator Kristy Trinier approached Caulfield in 2013 about creating a new work for the gallery, the U of A’s Centennial Professor in Art & Design suggested a smaller room, but Trinier was keen to see what he could do with the mural-sized space in Manning Hall.

Caulfield was curious. Earlier collaborations with sculptor Royden Mills had convinced him that larger, site-specific artworks were not only possible, but also deeply rewarding. “In many ways [our] collaboration pushed me,” he says. “Roy was working on a large scale and in order to respond to what he was doing, I worked larger. And then I started to actually show the wood blocks because they physically felt right next to his sculptures. That’s when Kristy invited me to make this piece.”

Creating site-specific artwork for Manning Hall had its challenges — like a door in the middle of the wall.

“Normally I would just make the work, and respond to the space later,” laughs Caulfield, “but early on I had to think about scale. It was a new process for me. I like to leave things open and organic and let it evolve. But always in the back of my mind I had to think ‘where does the door go?’ and ‘how many panels can I fit into this space?’”

Working in concentrated moments throughout the day in his home studio, Caulfield carved each panel individually with Japanese hand-carving tools collected during frequent trips to Japan with his wife, Akiko Taniguchi, who is also a printmaker. Finer tools would occasionally give way to larger grinding and dremel tools. “For me, what was exciting about that is that there would be a section that would take a month, and then I’d go behind my garage and take a grinder and that essentially would be a huge section and it would take two hours. It would fluctuate in between really slow and very quick.” 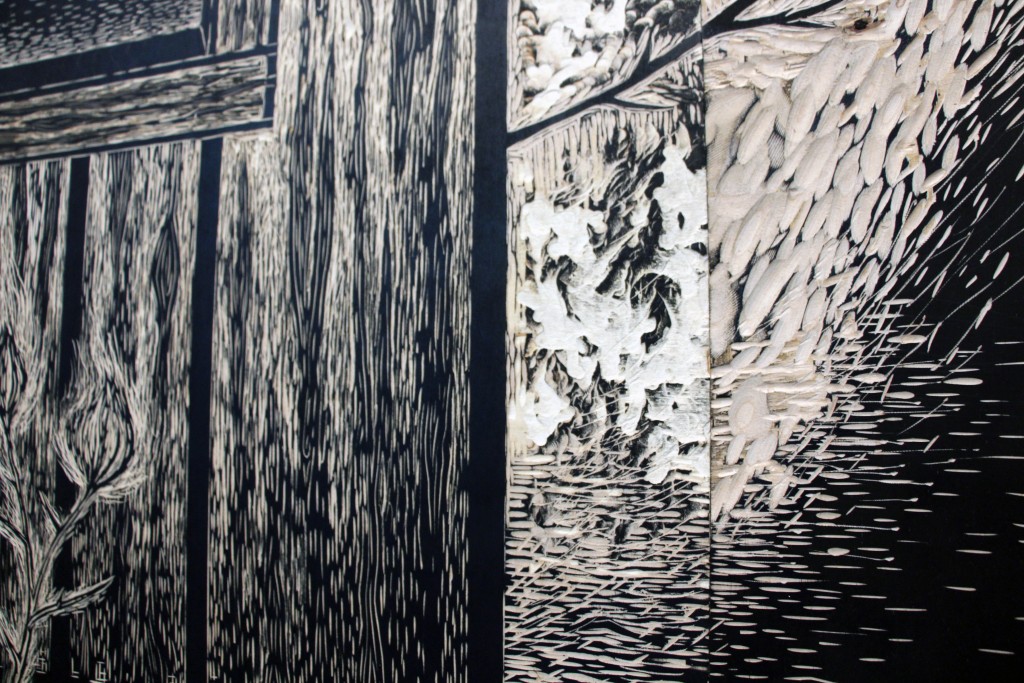 The Flood moves and boils, blurring the line between mechanical and biological — Caulfield’s visual signature. Geometrical lines, curvilinear marks and gouges radiate out from a central fire image: a wooden structure in flames. There is narrative, but it is both ancient and prophetic, existing in an unknowable dimension. The Flood is beautiful and undeniably dark, but it fascinates rather than repels.

“I didn’t want to run away from embracing this idea of myth — the flood, this big foundational story,” says Caulfield. “And so on the one level, that’s clear narrative, but again on the other side it’s somewhat ambiguous and opaque. The viewer is forced to take their own journey.”

Caulfield cites 15th century apocalyptic imagery by artists like Albrecht Dürer as direct influences, but attributes a recent visit to Hiroshima and the Miyajima Shrine in Japan as other sources of inspiration. Overarching all is the contemporary complexities of living in an oil-rich province, which Caulfield has called home for most of his life. “Especially around issues of the environment, things can get so polarized,” he says. “Meaningful discussion doesn’t happen. So I guess that’s one thing that I hope I can contribute to as an artist – a full conversation.”

Other than a persistent case of tendonitis, Caulfield is very pleased to see The Flood installed in Manning Hall, which Art Perspective recently declared the show as one of the five most anticipated exhibitions in Canada this year. 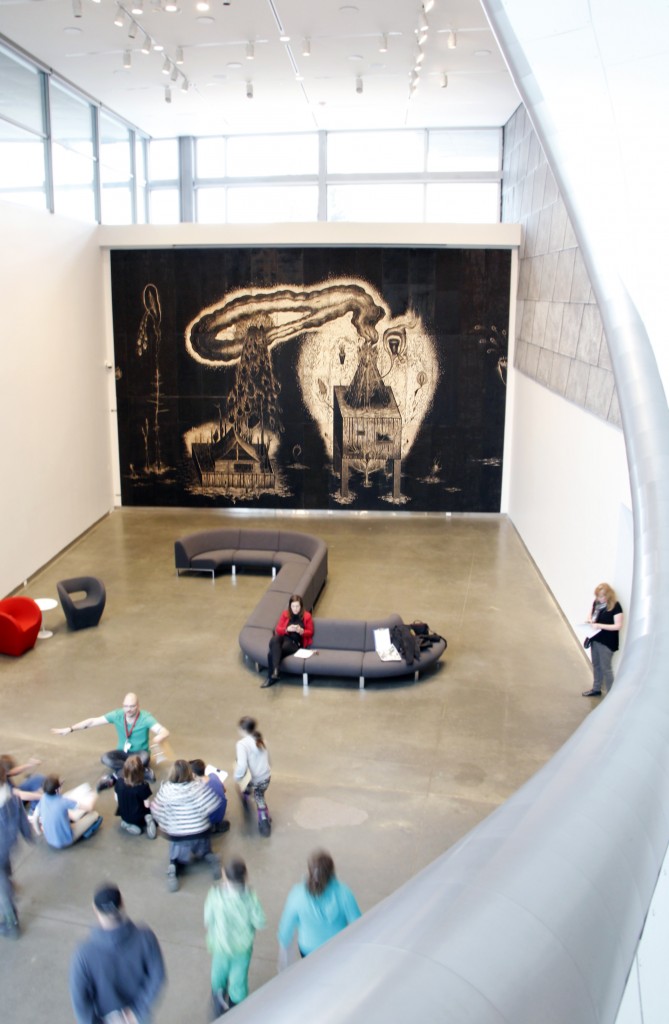 Sean Caulfield’s The Flood, installed at the Art Gallery of Alberta

“There are moments in my career as an artist where it’s like, ‘Wow, I did something different, I took a step.’ That sounds corny, but I do think it happens,” says Caulfield. “You go through periods in your practice, and it’s not like you’re repeating yourself but you’re in a zone, and yet you don’t want to change in a way that’s artificial. At the same time, you’ve got to push yourself. So for me this has been a great experience because it’s a new place creatively.”

Photographs and video by TJ Jans.

Upcoming Conversation with the Artist
Sean Caulfield: The Flood
April 10 at 2 p.m.
Art Gallery of Alberta