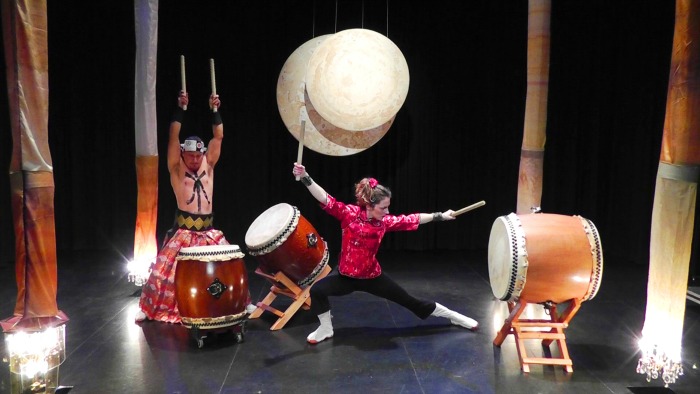 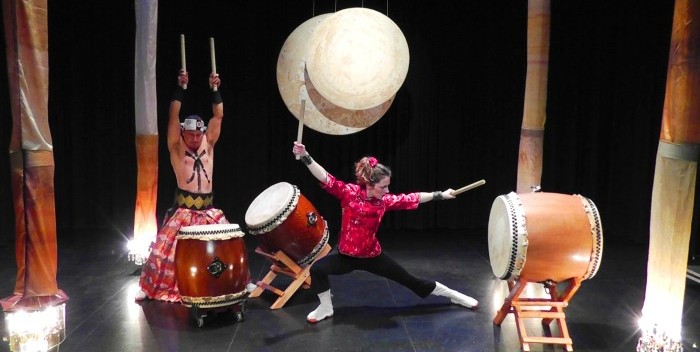 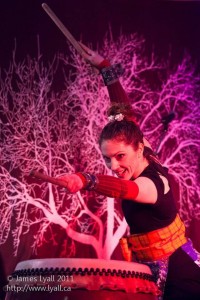 We have the coolest staff in the Fine Arts departments at the University of Alberta. Take Twilla MacLeod (’00 BFA Acting). She currently works full time as the Graduate Advisor in the Department of Music and somehow finds the time to perform and teach taiko drumming as part of the Booming Tree Duo.

Twilla is one of the female artists on deck to perform at SkirtsAfire herArts Festival March 5 – 8, 2015, in conjunction with International Women’s Day. This multi-disciplinary Arts Festival, founded by UAlberta drama grads Annette Loiselle (’89 BFA Acting), Nadien Chu (’06 BFA Acting) and Sharla Matkin (’96, BA Drama), features the work of women and takes place in the heart of Alberta Avenue (118th Avenue), a community that is reinventing itself and growing as Edmonton’s newest arts and dining district.

Q: How did you start taiko drumming?

A: I first saw taiko drumming while living in Japan for a couple of years. I didn’t have an opportunity to try it there, but as a performer I was very drawn to how powerful the women who played appeared. When I came to Edmonton I took workshops with Kita no Taiko, Edmonton’s community group. I played with them for five years before breaking off and forming Booming Tree with Greg Shimizu.

Q: How did the Booming Tree Duo come about?

A: In 2008 my partner, Greg Shimizu, and I were asked to contribute to the sound design of a Fringe production called Anime, using taiko and small hand percussion instruments. After that we were commissioned by Concrete Theatre to write a short kids’ play for the Sprouts Festival where drums were part of the soundscape. On the heels of that festival, several other performance opportunities and collaborations presented themselves, so we decided to become our own entity.

Q: Booming Tree is celebrating its 5th anniversary this year (congratulations!). What have you enjoyed the most?

A: I have enjoyed sharing taiko with people who have never experienced it before. It’s a very visceral art form, very emotional, despite the lack of narrative. Also, the duo format is extremely challenging. As a player you are always very exposed and you have to keep the energy going or the whole thing falls apart.

The constant training and trying to improve has taught me that I am stronger than I think I am.   One of the statements in our publicity package is that we play to celebrate the strength and power of the human form. We’ve held on to that from day one, and it’s something we keep coming back to. Greg suffered a very serious concussion two and half years ago that he is still recovering from, so his journey with taiko has really changed. A lot of things are more challenging now than they used to be. Some of things we do that were commonplace before his accident are now victories every time we do them. So, those words “strength” and “power” have taken on a deeper resonance as well.

Q: What has surprised you most about the journey you’ve taken as artists over these past five years?

A: I can’t believe the width and breadth of things that we’ve been able to do in such a short time.  We were looking at our show spreadsheet a few weeks ago and we realized that we have performed over 200 times. We have travelled. We’ve been in a Travel Alberta commercial.  We’ve collaborated with ProCoro. We were part of the soundtrack for “The Great Human Odyssey.” We’ve been flown through the air while drumming. We’ve been teaching and are doing more and more of this all the time.  We have been incredibly lucky.  I knew we’d be playing, but I never would have expected that we would be as busy as we are.

Q: Booming Tree doesn’t just perform; you’re also extremely active as teachers and mentors to other performers. Why is this important to you?

A: This style of drumming seems to really enable people of all ages to express something that is deep inside themselves. Sound is energy, and these drums make a lot of sound, they change the way a room feels after they’ve been played. I particularly love working with women, and seeing them experience taiko. And, when you have groups of people coming together and locking into a rhythm, they carry each other and in doing so they become stronger. It’s hard to describe, but it’s an incredibly beautiful, transformative thing.

Q: Are there any upcoming performances you’d like people to know about?

A: We will be performing at the Skirts Afire Her Arts Festival, at the A-Line Variety Show on March 5th at 7:30 p.m. We will also be teaching a kids taiko camp (ages 8-10) during spring break through Concrete Theatre (details on the Concrete Theatre website).

For more information about Booming Tree, visit their website