Brad Necyk’s final visual presentation for the degree of Master of Fine Arts in Drawing and Intermedia is showing from now until October 26th at FAB Gallery.

Pharmakon resonated personally with me right from the beginning. The pharmacy shelving photograph used in the promotional imagery captured me immediately as I worked for a number of years in pharmacy as a tech so the photos presented a very familiar space for me, having worked in between those shelves for years. In my time as a Pharmacy Tech watching the way people navigated their ailments impacted me deeply. Chronic pain and mental ailments become a living part of a person’s identity and really impact the way a person relates to the people and world around them. Brad’s work speaks to that same vein of thinking, so I did an email interview to discuss his work in a bit more in detail.

Could you tell me what Pharmakon is about and a bit about your work in general? I guess a bit of a distillation of your artist’s statement?
The Pharmakon is a Greek word meaning both remedy and poison. It is a very interesting term when I reflect not just on pharmaceuticals but how the medical apparatus itself functions. It is in medicines attempt to distance itself from disease that it enfolds back upon itself placing disease back at its centre. Psychiatry becomes an increasingly interesting medical field with a fascinating origin and an even more interesting system and apparatus of exclusion and inclusion. Prior it was very much about designating the abnormal but has grown to be incredibly inclusive, specifically with the new release of the DSM-V. This is where the deviation from the mean (a ‘normal’ individual) moves outwards towards the fringes where the abnormals lay is becoming ever more flat, including more and more of the population. Essentially making almost everyone part of DSM-V in some way, abnormal now the normal. To me this isn’t good or bad. It is just really interesting to watch and think about. This is where what we tried to distance ourselves from has enfolded back upon itself. This is a specific case study, one that I look at heavily within the show, the discipline of psychiatric intervention, but it is meant to be looked as a metaphor for the larger functioning of many other broader and more pervasive systems that govern and form us as subjects.

My work specifically works through various forms of the medicalization of the body, its applications, the historicity of the conceptions of the body and medical knowledge, and how the various apparatus’ move and shape us. This is done through the mediums of photography, video and performance. 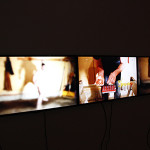 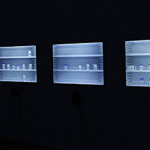 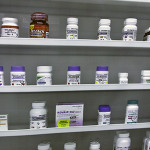 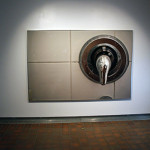 What is the message you would like people to take home from your show?
Well the most immediate feedback that I am getting from the public is how much they can relate to these stories of medicine and mental health. I think its a good thing to get the conversation of mental health out there so I am happy about that. Personally I wanted there to be a familiarity to the work but ultimately the viewer is left with something unresolved or uncomfortable; these are not comfortable movements, these are sterile pill bottles, these aren’t really that happy of stories. This once again is about the pharmakon, a remedy and a poison. There is something cathartic for me, for the viewer in seeing and hearing this work, but it comes at a cost.

Can you tell me about the process of doing the shoot for the pharmacy photos?
I had to arrange to go in and work with a pharmacist for a day to get the shots. Since I wanted the pill bottles to be at a 1 to 1 scale when printed I had to adjust the architecture of the shelves to make them 2 feet by 3 feet. Then it took hours to get the camera in just the right position to get that sense of depth. I have a pretty good understanding of the drugs out there in each of the drug classes I took photos for, so I got the pharmacist to provide me with all the bottles they had of each drug. After all that technical stuff it was just taking the photo.
Can you tell me more about the symbolism of the bathtubs in the piece to speak
Well I was very much interested in the history of the body and medicine and the knowledge that surrounds both of them. Each epoch had their own conceptions of the body, how it worked and how to treat it. In the early modern era up into the 1800’s there was a certain way of thinking of certain symptoms that they referred to as melancholia (contemporarily now generally depression) and one of its modes of treatment was long warm baths. So in the early 1800’s psychiatry was just being formed as a proper medical discipline and new forms of treatment were being used. This is before psychoactive pharmaceutics came into use so there they had to use other means for entrance into the body. So there was one practice I was reading about where the patient would take a long bath, then after that they would empty the bath with a bucket. One bucket at a time, but as he would take a bucket out the psychiatrist would put a bucket in. So this went on for a long time and was about finding remedy in the replication of movements. While the patient did this he was made to speak his ‘true’ biography, this was another movement that was being used in repetition. So it was through these two movements that the psychiatrist was gaining entrance into the body and attempting to treat the patient. My work with the bathtubs works along those same lines with repetitive movements and speech however I play with it (primarily philosophically with what I am reading).
Your work is extremely personal in its focus.  What is it like having your own journey up on display?
It’s personal but it feels more distant every day. Like the person in those pieces is someone else. All you need to know about death can be found in cutting your hair and finger nails but so can birth. I never really feel a continuity from one day to the next too much. But that is what narrative is about, it’s about spacing, placing and making a line from one moment to the next, even though the journey as actually experiences is much more multifaceted and jagged. Plus I guess there is always the chance you might think I’m lying. I’ve had a lot of people ask me if those are true stories. I bet they’re just as true as I could make them.
What drove you to exploring your own life and the realm of psychiatry and medication? Was the process at all cathartic to you, or was it just an exploration?
All artistic work is cathartic, no matter the subject, since it’s always filtered through you–your emotions, your memories, your sensibilities. I loved making this work, I needed to make this work. For one thing it was something I happened to know a lot about, so that’s always a great starting point. Second it was a difficult time in my life so reflecting on it and making things in reaction to that helped me through the past two years.Ultimately it became a theoretically incredible place to work in as it had much larger ramifications than just looking at me or medicine or psychiatry. It’s an archive of one narrative of my life but its really an archive of the systems and structures of contemporary culture that shaped and formed me.

This is the final presentation for your Master of Fine Arts in Drawing and Intermedia, where do you hope to go with your career now that you have your Masters?
I am a brand new father to a baby girl named Elliot, so I am going to focus on that for now. She was born just before my show was going up. Then I am really enjoying teaching at the U of A, such an exciting time for the intermedia program. After the dust settles from all of this I have a number of new bodies of work I want to finally get to making, then I’ll be looking at PhD programs and further teaching opportunities and see where things take me. Whichever or in which combination they come in, I am pretty excited for what comes next. 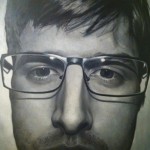 Brad Necyk is a recent MFA graduate in Intermedia working through the mediums of photography, video and performance. His current work focuses around (auto)-biography, psychiatry and biopolitics. He has been shown around North America, participated in artists’ residencies, delivered academic papers internationally and currently teaching a number of courses in Drawing and Intermedia at the University of Alberta. You can access much of his work at bradnecyk.com or on his youtube page.

The University Wellness Services – Mental Health Centre assists students with a wide range of mental health and life concerns.  If you or anyone you know is in need of mental health services please visit www.uwell.ualberta.ca for more information on the services available to you.

10 ways to do great things for UAlberta Fine Arts