Usual program notes offer the audience insight into the lives of composer and composition. For the U of A Music’s 50th anniversary celebrations, Julia Byl took an ethnomusicologist’s approach, heading into the heart of our field of study to interview the people of the University of Alberta music department—students, faculty, alumni, supporters— to highlight them as much as the music they create. The following notes share the insights of our UAlberta music makers to bring the audience into their creative processes.

Pianists often veer towards vaudeville with this piece, playing it fast and loud, with stagey exaggeration. Darius Milhaud was a serious modern composer of Paris between the wars: the name given to his compositional cohort, “Les Six,” exudes youthful self-importance (which the group’s output justified). Yet you can see the temptation for a schlocky performance. The piece doesn’t quite hang together compositionally, though it uses catchy popular material throughout.

It moves from the first movement’s short fast themes, originally conceived as children’s theatre music; to the second movement’s slow calls and responses, an African-American trope; to the third movement’s Brazilian samba rhythms.

Pianists Jacques Després and Patricia Tao recognize this element of off-centre whimsy, but also describe the suite as witty and urbane. Instead of looking within the composition to interpret it, they look outwards: cosmopolitan Paris of the 1930s pulsated with the music of jazz and the theatre. Tao describes the second movement as poignant and nostalgic—Després speaks of nonchalance and the profound delight of doing absolutely nothing—and one imagines a solitary stroll in a park, bird song mixed with the themes from last night’s hot club in a pre-iPod soundtrack for one. 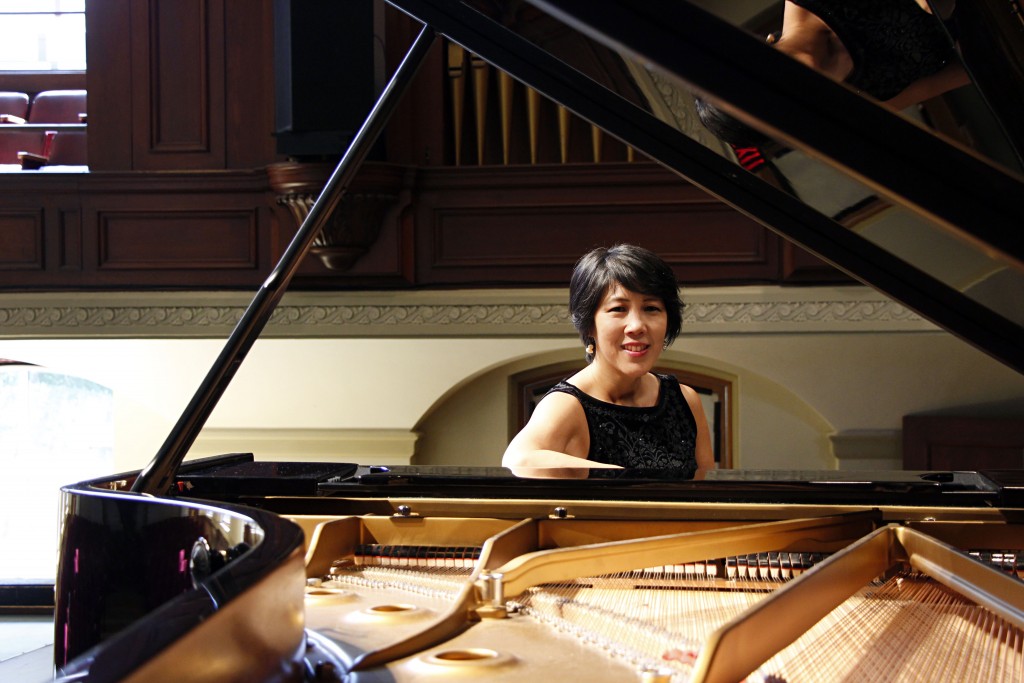 “All of this music was just hanging in the air…”
Jacques Després, interview with Després & Tao 1/6/16

For many of you, the name Scaramouche conjures up Queen rather than the commedia dell’arte. Either way, we are firmly in the world of the popular, but popular music too can be understated, even internal. The pianists’ performance matches their description of the work: “refined and clear.”

The first horn concerto of Richard Strauss holds an undisputed place in the instrument’s repertoire, an impressive outcome for the work of an 18 year old university student—and not even a music major at that (Strauss was into philosophy). Years of hearing his father play as principal horn under Richard Wagner allowed Strauss to master the instrument’s idiom very early in his compositional career.

Mastery through listening is a good theme for our anniversary celebrations. Playing in the wind ensemble is Taran Plamondon, the recent winner of the University of Alberta’s undergraduate concerto competition. A few weeks from now, he will play on his own French horn, on this very stage, the same golden notes you now hear produced by a former member of the renowned Canadian Brass. It is unusual for a musician to have the chance to support, then solo in the same work in the span of a few weeks. But as master classes are core to pedagogy in the music department, we’ll just imagine this extra serendipity as a fitting update of the young Strauss’s good luck in fathers, and good use of his luck. The horn lines vault from father to son, from professional to student. Listeners who wish to elevate their analytical skills are also in luck: conductor Angela Schroeder says, “if you know nothing about tracing musical motifs, this is the piece you can do it in.” 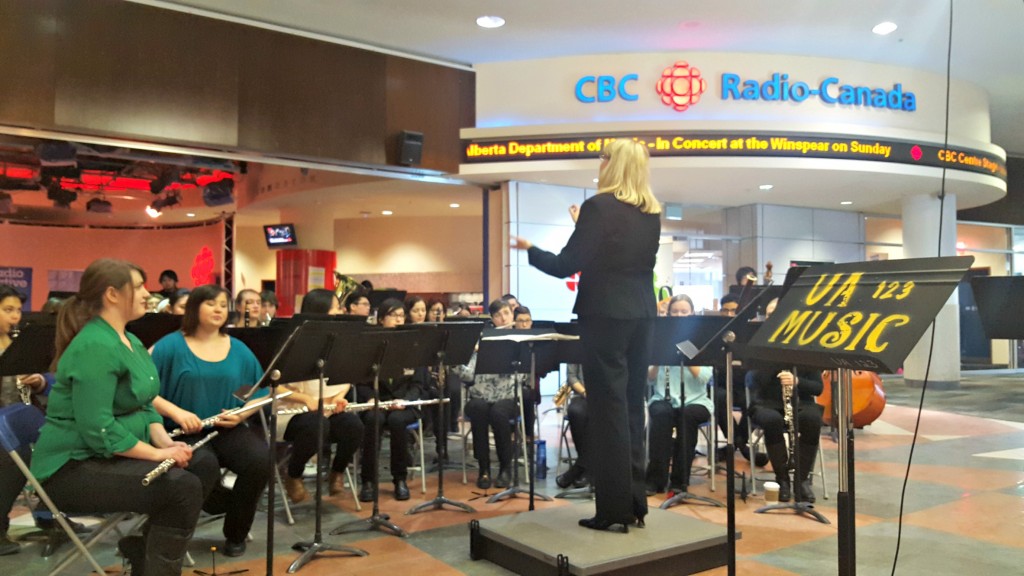 The Symphonic Wind Ensemble performed at the CBC stage in downtown Edmonton Jan. 21, 2016 to kick off the 50th anniversary celebrations. Photo by Salena Kitteringham.

“For the students, this is real professional opportunity.”
Angela Schroeder, interview 1/8/16

A constant pulse undergirds Mothership, Mason Bates’ cosmic musical metaphor for winds, electronica, and eclectic soloists. This is no surprise as Bates is an electronic dance music DJ as well as an American composer, and skilled in using a rhythmic track to regulate his listeners’ experiences.

“There is this new movement—to bring people together virtually whenever possible.”
Angela Schroder, interview 1/8/16

Modern digital media shaped this piece in other ways, notably in its online premiere in 2011 when it was played by the international YouTube Symphony Orchestra, and watched live by over two million viewers. A piece to resonate with modern students. The pulse does more than signal our mediated times, though: it tethers the electronic track to the ensemble and the soloists, all accustomed to widely different performance styles. Mason takes this into account: listen to the ensemble’s bluesy idiom as it accompanies the electric guitar, or to how its softer sustained notes complement the rounded resonance of the horn and saxophone. We’ll give the last word to the student players, who were taken with the initial bars of the piece in which the sonic ship revs up and “lifts off”—into a brave new world of media and genre fusion.

The verse of the German poet Schiller is most often linked with The Ninth, but Beethoven himself penned the words of that first, surprising bass voice: “Oh friends, no more of these sounds!” What sounds? After this point, the music is going to become very familiar—the symphony plus chorus of “Ode to Joy,” so novel in its day, is now a mainstay of ad campaigns. But it is those truculent, unison string passages of the fourth movement’s opening moments that conductor Petar Dundjerski wants his musicians to notice. He calls the symphony “the UN of the art world”—surely a positive parallel?—but then notes that though the organization is meant to be at the service of all humans, “sometimes, it is hijacked.”

Indeed, the message of the Ninth has been conscripted by leftist polemicists and Nazi propagandists. We do a smaller disservice when we think only of the idealistic ending of Beethoven’s work, without listening to the threat of those voices. The well-known melody and meaning compliment us on our humanist erudition, ending in flattered complacency. Dundjerski avoids this by urging his students to think of “what humanity is at its darkest moment,” as well as “what it could be, what it should be.” Edmonton’s welcoming of Syrian refugees would not be as moving without the heartbreak of last year’s photos and the urgency of family tragedies, still unfolding.

Even as silence began to fall around him, Beethoven was ever attuned to contemporary political life. At our 50th anniversary celebrations, we will hear the symphony from its halfway point, building swiftly to those moments which, performed live by hundreds of musicians, cannot fail to raise hairs on even the most seasoned neck. Yet we must think of 2016 as much as 1824 if we are to get the symphony’s real message: “the zenith of this piece tells us, ‘enough of this dissonance, of this lack of synchronization; all we need to do is see the light of our brightest potential and then embrace it.’”