Video Q & A with Roger Admiral

Pianist Roger Admiral and composer Howard Bashaw have collaborated together at the University of Alberta for more than two decades. Bashaw describes their special artistic relationship best in the CD liner notes for his 15 for Piano, remarking how the recordings of his works performed by Admiral reflect “the dynamic, symbiotic ethos” that underlies their ongoing collaborations.

Known for his dedication to contemporary music, Roger Admiral was one of a group of five Canadian pianists who commissioned Howard Bashaw to compose 15 for Piano (2012). It was Admiral who performed the new work at one of the premières in Toronto at the Canadian Music Centre, and Admiral again who played Bashaw’s epic new piano solo for the Centrediscs label recording.

The Curious Arts blog asked Admiral why he enjoys commissioning and premiering new piano music. Here is what he had to say about debuting new work like Howard Bashaw’s 15 for Piano

Edmonton audiences can look forward to experiencing Howard Bashaw’s 15 for Piano with Roger Admiral performing as part of the Contemporary Canadian mainstage concert Sunday, Oct. 18 at 3 p.m. in Convocation Hall. 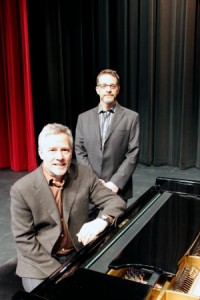 Roger Admiral at the piano with Howard Bashaw. Photo by TJ Jans.

Roger coaches contemporary chamber music at the University of Alberta. He performs solo and chamber music repertoire spanning the 18th through the 21st century. Known for his dedication to contemporary music, Roger has commissioned and premiered many new compositions. He is winner of the Canadian National Music Competition and Sir Ernest MacMillan Memorial Award. He studied at the Royal Conservatory of Music, University of Western Ontario and University of Alberta.

Beyond Therapy throws back to 1980s fashion