It was cellist Colin Ryan who brought George Crumb’s Vox Balaenae (Voice of the Whale) to the attention of Shelley Younge.

“He said we should play it sometime. That was nearly 40 years ago! I guess that ‘sometime’ has finally arrived,” laughs Edmonton Symphony Orchestra flutist and U of A Music instructor Shelley Younge.

Younge and former ESO principal cellist Ryan, together with longtime friend and guest pianist Eileen Keown, are set to unleash the powerful forces of nature in Convocation Hall with The Voice of the Whale and other Creatures, a mainstage concert on Sunday, Nov. 1 at 3 p.m. 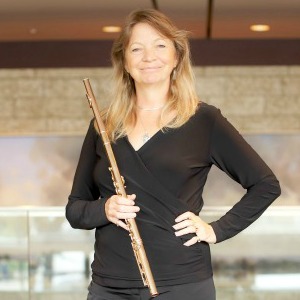 Vox Balaenae (Voice of the Whale), composed by George Crumb in 1971, was inspired by a late 1960s recording of humpback whale singing.

“The recording sparked Crumb’s imagination but rather than work with the recorded sounds, he instead scored a piece of music for the flute, cello and piano using extended techniques, shifts in tonalities and pitch bending to interpret the sounds of the whale. This was just the beginning of George Crumb’s sound journey,” explains Younge.

The piece is amplified in performance and remains avant-garde, even for today’s players and listeners.

“I always loved this piece, but when you look at the music it is intimidating. However, there’s nothing theoretical or extraneous about it. Everything is written into the piece for a reason. You just play what he has written and the work speaks for itself.”

Younge says the piece flows over three movements, starting from the beginning of time, winding through the ages with a theme and variations, and ending very quietly and peacefully at the end of time. “It certainly conjures up the listener’s imagination.”

Crumb requires each of the three players to wear a half-mask in performance, an element that might at first seem like a gimmick, but Younge says it serves the composition’s artistry well. By stripping the players of any stage persona, the audience is free to focus their attention more on the impersonal forces of nature conveyed in the sounds emitted, rather than focusing on the musicians.

“The mask removes me personally from the audience somewhat, and I find that, in some ways, that helps me concentrate and focus even deeper on my playing.”

The Voice of the Whale and Other Creatures program also features a work inspired by the sounds of a wolf.

Composed in 2002 by Ellen Lindquist while in residence at Canada’s Banff Centre for the Arts, Nakoda is named for the alpha female of the Peter Lougheed wolf pack.

“Nakoda, herself, was named for the Nakoda First Nations tribe of the Bow Valley,” explains Younge. This particular wolf was collared in 1996 by wildlife ecologists to obtain data on the pack’s movements. Nakoda was killed legally in 2000 by a hunter in the Kananaskis country, just outside the boundaries of Banff National Park.

Played on alto flute, utilizing several extended flute techniques, percussive sounds, pitch bending and singing into the instrument, this dynamic contemporary piece is dedicated to the conservation of wolves of the Canadian and American Rockies.

“Wolves and humans have such a conflicted relationship. We are both fearful of them and fascinated by them. My partner spent 15 years working in the northern bush and whilst listening to me practice it, he was struck by how the composer has really captured the sounds of the wolf.”

It was a student that first brought Nakoda to Younge and she’s been itching to perform the piece for a few years now. “If only teachers had the time to play every piece they teach!” she laughs.

To round out the Sunday afternoon concert, Trio for flute, cello and piano (1959) by American composer Ned Rorem has been selected, a piece Younge calls virtuosic and fun. “It is the kind of work that the three of us will leap to our feet for celebratory bows once we are done.”