How do you write a bicycle-themed piece of music? Start by sounding a bike bell. 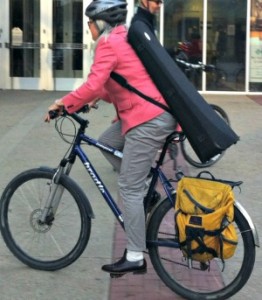 Taran Plamondon, a third-year French horn performance student at the U of A, was asked by the C’mon Music Festival to compose a new work that combined Edmonton’s love for cycling with its enthusiasm for summer festival-going.

Incorporating video clips of Edmonton cyclists ringing their bicycle bells, Plamondon’s Tandem Bike Rondo premieres Friday, July 17 at 8 p.m. after a parade of cycling musicians and festival-goers wend their way through McCauley to arrive at Studio 96.

“What we are doing is literally writing bicycle bells into it,” explains Plamondon. “I was thinking tandem bikes, one person following the other person, and contributing and riding in tandem. I wrote a melody that works in tandem with itself — a fun, slapstick, little tune.”

As the title suggests, Plamondon is utilizing a rondo style to structure Tandem Bike Rondo

“It’s a pretty simple convention that composers like Haydn and Mozart used very often. They have an A section, the main section or chorus or melody or tune sort of thing, and that’s contrasted by a B section, an episode that is unrelated. Then you have another A section. Another B. And so on and so forth; you get a sandwich of choruses and episodes.”

During the B episodes of Tandem Bike Rondo, Plamondon gives free reign to the bikes.

“You can ring your bell as much as you want. That’s when the videos will be playing. That will just add the bicycle flavour to the piece.”

Near the end, listeners will recognize a famous melody from Nat King Cole, On A Bicycle Built for Two. “It should make a really fun tune.”

Curious about composition since he was a young teenager, Plamondon wrote his first piece when he was no older than 13 or 14. “It was for a project at school. We had to do a poetry reading with some background music. I was trying to find public domain music but then I thought ‘What the heck? Why don’t I write my own music?’ It wasn’t anything complicated. Just a bunch of triads and simple melodies. It worked out pretty nicely though, a nice piano tune.”

He says there was no better way to get better at composing than to just keep making new work. “At first I had no clue. I would just pluck at keys randomly on the piano.”

Eventually, through imitating other composers and listening to more and more new work, he began to understand the theory behind it.

At 17 he wrote Flight, a five-minute overture for orchestra which was premiered, to great acclaim, by the Edmonton Symphony Orchestra at Symphony Under the Sky.

“The ESO puts on a young composers’ competition every year. You submit a portfolio of your works to be considered, and if they select you, it is the best opportunity a young composer could ever get. I got to work with the resident composer to create the new work and I learned so much.”

He recalls the Symphony Under the Sky debut of his new work as the most nerve-wracking experience of his life.

“You spend several months preparing. You write it. You print out the parts and send it off. Then it is really out of your hands. You just show up and listen to it…. I didn’t have to perform it, it wasn’t like I was worried about making mistakes, the way you worry when you perform. I was more concerned about whether the audience would like it.”

Since then, Plamondon has gained confidence with his compositional voice. And while there are always a few butterflies each time a new work debuts, he looks forward to having some fun with at the premiere of his new work at the C’mon Festival this weekend.

Started by trombonist Kathryn Macintosh and a few of her colleagues from the Edmonton Symphony, the C’mon Festival (Chamber Music Old and New) is in its third annual iteration. Its debut was as an Edmonton Fringe BYOV on Alberta Avenue in 2013. The festival offers a little bit of something for everyone, tapping into Edmonton’s wide-ranging musical variety to nurture new works and connect musical experimenters and enthusiasts, and aims to draw new audiences to the riches of classical music.

“There are lots of different styles in Edmonton, they are all very well accepted, you just have to find your niche,” says Plamondon.

The C’mon Festival performed a fundraising event in the new venue, Studio 96, May 2015. Photo supplied from the festival.

To begin the procession to the opening Friday night concert, cyclists will convene at the southwest corner of Giovanni Caboto Park (95 Street and 108 A Avenue) at 7:15 pm. See “Bikey C’mon” Facebook event.