U of A Studio Theatre’s artistic director, Kathleen Weiss, caught up with Curious Arts to reveal the show titles for the upcoming season, and share insights on why she is passionate about producing these particular plays here and now.

“We are inviting audiences to be curious with us; to dive head and heart first together, with our students, faculty and guest artists, into some big questions,” said Kate. “The upcoming line-up of plays will prompt us to examine all aspects of the human experience.”

The season begins with Richard Greenberg’s The Violet Hour on September 18 – 27, 2014. The dark comedy is set in F. Scott Fitzgerald’s Great Gatsby-era and the main character is loosely based on Fitzgerald: John Pace Seavering, a wealthy Princeton graduate who wishes to be a publisher.

“He must decide between two manuscripts for his first venture: his best friend from college’s sprawling masterpiece, or his older, black lover’s compelling memoir. Suddenly a machine arrives at his office…spewing out pages from academic books of the future, detailing the devastating results of his choice. What will his decision be? Can he alter the future? How can he use his power at all, in the face of the alleged facts?”

Weiss said The Violet Hour soars off the page.

“The characters are the age of our students – young, beautiful, tormented, creatives that they can relate to. It will be a really appealing theatre experience for the literary lovers on campus, the budding writers in our community – those that aim to publish and those that do the publishing. There’s a lot there to draw in the bookworms and book clubs, to bring in the dreamers and poets, and really anyone with an affinity for the Art Deco aesthetic of the period.” 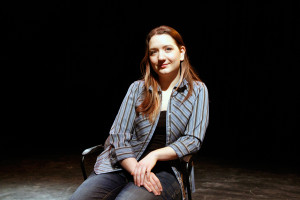 The Violet Hour is Lucy Collingwood’s MFA directing thesis and her introduction to the professional theatre community in Edmonton.

“Lucy is a very smart, literary director and well-suited to take on this stylistically innovative script from American playwright Richard Greenberg. It demands an intellectual literary acumen at the helm and is inherently theatrical in the way that it plays with illusion and reality.”

When the capstone BA Drama course, DR 457, produced Moira Buffini’s Welcome to Thebes this spring in the TIMMS Second Playing Space, Weiss said it became clear to her that Buffini speaks to this generation of students like no other playwright. “She’s a satirist. A feminist. So smart, very funny and the students love her.”

In response to the great student demand for Buffini, Weiss has boldly programmed a Buffini Festival this fall, producing two of the English satirist’s works, Loveplay and Blavatsky’s Tower on the U of A Studio Theatre mainstage, and a third, Gabriel, in the Bleviss Laboratory Theatre (formerly the Media Room).

“By being among the first theatre companies to introduce Western Canadian audiences to the forward-thinking work of Moira Buffini, the University of Alberta is innovating theatre practice in Alberta,” explained Weiss. “Our Buffini Festival presents great acting explorations for the BFA acting class of 2015, and fantastic research opportunities for our faculty directors, Jan Selman and Sandy Nicholls.”

Jan Selman directs Loveplay (October 30 – November 8, 2014), a satirical romp that covers two millennia in 90 minutes. “It emerges as a rather breathless mixture of La Ronde and 1066 and All That. Each of the 10 scenes takes place in one London location; over the centuries it moves from Roman temple to medieval abbey, elegant townhouse, Victorian studio and 1960s squat, eventually becoming a modern dating agency. The constant factor is the quest, often doomed, for love and sex,” Michael Billington of The Guardian writes in a 2001 review of the play. [updated]

Sandy Nicholls directs Blavatsky’s Tower (November 27 – December 6, 2014). “This is a metaphysical black comedy; the ultimate soap opera of family life in which an idealistic architect kidnaps his own family and locks them away to protect them from the world he cannot change. It’s like a modern Glass Menagerie with fascinating characters to unravel,” says Weiss.

To showcase what she describes as a “very musically talented group of BFA actors” graduating in 2015, Weiss has invited U of A alumnus and former Edmonton Opera artistic director Brian Deedrick to direct The Threepenny Opera by Bertolt Brecht and Kurt Weill (February 5 – 14, 2015). Deedrick last directed The Life and Adventures of Nicholas Nickleby at U of A Studio Theatre in February 2011.

“Brecht was an innovator that broke down the fourth wall and the Department of Drama has a great tradition of producing Brecht. Our Brechtian scholar, Piet Defraeye, is teaching a cross-listed Brecht graduate seminar in the Winter 2015 term and I am excited about the potential for cross-Faculty of Arts connections with the Wirth Institute, Modern Languages & Cultural Studies, Economics, History and Music.”

This will be the third Studio Theatre production of the great classic The Threepenny Opera in its 65 year history. The first production was in 1981 with Drama’s current Assistant Chair, then BFA Acting student Julie Brown in the cast, as well as Francis Damberger, Paul Gross, and Michele Fleiger. It was produced again in 1995, featuring Chris Craddock, Steve Pirot, Vanessa Porteous, Jane Heather and Brendan Nearey.

A top-notch creative team of collaborators has been assembled around Deedrick for The Threepenny Opera, including faculty designer Robert Shannon, choreographer Marie Nychka and Alberta Ballet’s musical director Peter Dala, who will lead a 13-piece orchestra in the pit.

New directing faculty member David Kennedy will make his Studio Theatre directing debut (March 26 – April 4, 2015) with Strindberg’s A Dream Play, in a potent adaptation by Caryl Churchill, who is “one of the most fascinating contemporary female dramatists right now.”

Weiss said programming A Dream Play was driven by Kennedy’s unique vision for the production; he will cast all the females from the 2015 BFA acting class as Agnes, daughter of the Vedic god Indra, who descends to Earth to bear witness to the human experience. 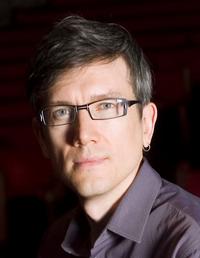 “I am very excited about putting this beautiful and complex piece of theatrical magic in the hands of a master director like David Kennedy,” said Weiss.

The final U of A Studio Theatre play in the season is Tribes by Nina Raine (May 14 – 23, 2015). Tribes premiered in 2010 at London’s Royal Court Theatre and its off-Broadway debut in 2012 won the Drama Desk Award for Outstanding Play. This provocative and witty play introduces an unconventional family with three dysfunctional adult children still living at home. It focuses on Billy, their deaf son, who was raised to read lips and speak rather than sign to communicate. Billy falls for Sylvia, a young woman who is becoming deaf herself, and he finally discovers what it means to be heard.

“Amanda is a director who is very focused on the human condition. She cares deeply about people and their relationship to one another and to society. Her directing reflects this deep engagement with community.”

About U of A Studio Theatre

The U of A Studio Theatre showcases Canada’s leading university theatre students in acting, directing, theatre design, vocal coaching, technical theatre production, and stage management as well as faculty and distinguished professional guests from across Canada.

Q & A with Katie McConaghy