Before the curtain goes up tonight on Megan Watson’s MFA directing thesis, When the Rains Stops Falling, I caught up with the promising theatre director to find out what kind of rehearsal room culture she strives to create. 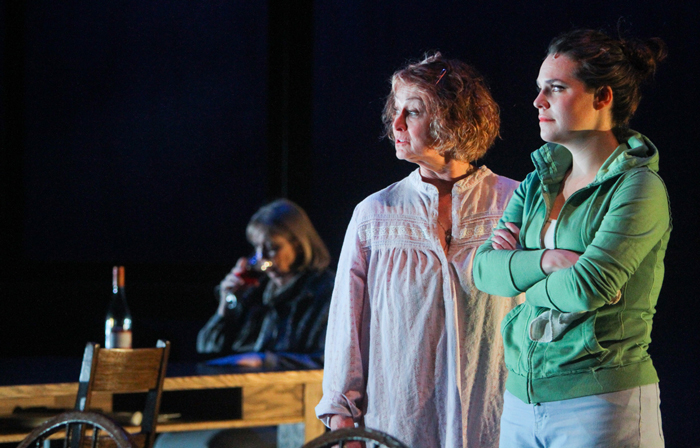 Sandra Nicholls and Bobbi Goddard with Kathleen Weiss in the background. When the Rain Stops Falling plays at the Timms Centre May 15 – 24, 2014. Photo by Ed Ellis. Lighting & set design by Lee Livingstone. Costumes by David Lovett.

A self-proclaimed “actor’s director,” Megan is an Ottawa native and Ryerson-trained BFA actor. She says directing has always run concurrent to the acting she pursued when she was younger.

“In Ottawa, I had all these lovely opportunities to direct things here and there within a very generous community of theatre artists. I’ve always had this notion that the really good directors were also the very best actors because those were my role models in Ottawa.”

Megan took off the director’s hat to really focus on acting at Ryerson, but once she graduated from acting school, she says the bulk of the work that cropped up was peer-driven, self-produced, indie projects. One project after another, Megan found herself donning the director’s hat once again.

“It was a great way to realize what I love about theatre is not being on stage but being a part of the process or even leading the process. The love was not actually the adrenaline of being on stage, it was the feeling of being in the rehearsal hall, making something out of nothing or working with a script and making it come to life. This is what I actually love and much prefer it to being rejected 16 times a week. I don’t love, love, love auditions,” she laughs.

Over the four years post-Ryerson BFA that Megan was living in Toronto, there was a moment when she woke up and realized she hadn’t stepped foot onto the stage in more than two years time. She recalls the realization that she was devoting herself to directing and teaching exclusively, and the fact that she was loving that, as an epiphany of sorts.

“I was like, whoa! I think I need more language…I need more training, more tools and a deeper understanding of the craft if I am going to put myself in the position where everybody apparently thinks I have something to say.”

She immersed herself in a year of self-study where she did as much assistant directing as she could and took as many workshops as possible. During that time period, she became friends with Mitchell Cushman, a U of A directing alumnus now based in Toronto. Mitchell coaxed Megan to go out West to pursue the University of Alberta’s directing program.

“The thing I found most appealing about the University of Alberta’s directing program was the opportunity to do a lot of plays and in some cases, like at Studio Theatre, on a pretty large scale and platform. Toronto can be really fast and you need to work a lot to pay the bills. I thought I needed to slow down a bit, which is funny, because this program is in no way a slow down! Opening myself up to the rest of the country was also appealing because it can feel pretty claustrophobic in Toronto, as wonderful as it is.”

During her graduate studies at the U of A, Megan also had the chance to teach. She taught three acting and play analysis courses in the Department of Drama and was recently recognized with a Faculty of Arts 2014 Graduate Teaching Award for giving such articulate and meaningful feedback to her students. 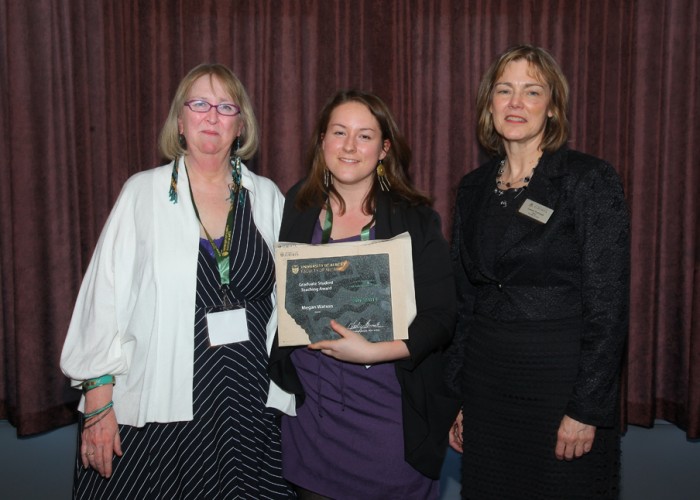 Megan Watson received a 2014 Faculty of Arts Graduate Teaching Award, presented by Kathleen Weiss and Dean of Arts, Lesley Cormack on May 6, 2014.

For Megan, directing and teaching are intrinsically linked.

“It isn’t to say that I am teaching in the rehearsal hall but my philosophy remains the same. My primary function is to develop an environment where people feel safe and challenged to take risks and to go beyond what they thought they were capable of. The culture I am trying to create in both the classroom and the rehearsal is a space where people can do their job the best that they can do. That’s the beautiful thing about theatre – we all have these roles and they all overlap and everybody contributes by bringing their strengths to whatever group of people you assemble. It is about being able to be the best version of yourself; I think that’s a great way of creating art.”

For her MFA thesis project, When the Rain Stops Falling by Andrew Bovell, Megan finds herself in a bit of a role reversal situation. She is the student, but at the helm of a cast that includes U of A Drama veteran teachers David Ley, Sandra Nicholls and Kathleen Weiss. Is it strange to direct the Chair of the Department of Drama? 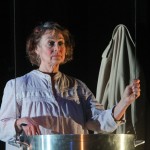 Sandra Nicholls in When the Rain Stops Falling. 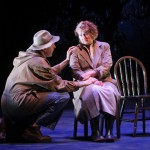 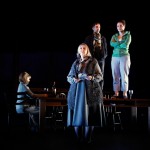 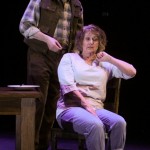 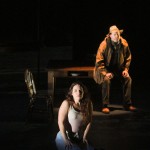 “The casting started with the play and the play required these humans and, in fact, I don’t think I would have cast them any other way. All the faculty members are so right for their parts and bring something so amazing to each character. I didn’t think about their other roles in the Department of Drama. I was just thinking…I need to do a really good play. And you are the right person to do this play! Will you do this play with me?”

The reality is that Megan and the faculty members do work together in a different student/teacher context, but in both the classroom and rehearsal hall, all players — whether they be actors, directors, students or teachers — are collaborators with each other.

“We are all working together to serve the play the best way we can. That’s the feeling I want to create in the room. And that’s how our faculty, teachers like Kate Weiss, work in the classrooms here too. A lot of their drama pedagogy is about asking the right questions of their students. That approach transfers into the rehearsal hall nicely for all of us in this new context.”

When the Rain Stops Falling is Megan’s MFA thesis project at the University of Alberta. An Ottawa native and Toronto-based freelance director, Megan is a graduate of the BFA Acting program at Ryerson University. She is the winner of a 2014 University of Alberta Faculty of Arts Graduate Student Teaching Award.

About When the Rain Stops Falling

When the Rain Stops Falling by Andrew Bovell premiered at Brink Productions in 2008 for the Adelaide Festival for the Arts. It won numerous awards, including the Queensland and Victorian Premier’s Literary Awards for Best Play, the Sydney Theatre Award for Best New Australian Work, and the Adelaide Critics Circle Individual Award. It has been produced extensively internationally and is arguably Andrew Bovell’s best-known work, with its New York production at The Lincoln Center (2010) named Best Play of the Year by Time Magazine. For show times and tickets see www.ualberta.ca/artshows

When the Rain Stops Falling