A year of 50th anniversary celebratory performances for U of A Music faculty and students kicks off Sept. 19 in Convocation Hall as landmark venue turns 100 years old

As the curtain rises on a new season of mainstage concerts, the University of Alberta Department of Music prepares to mark two milestones. This fall, Convocation Hall, the treasured chamber-music venue where U of A Music performs on campus, turns 100 years old. And the music department celebrates its 50th anniversary in 2015-16.

To launch a celebratory season of faculty and student performances, the first concert of the season, Béla Bartók: Art and Nature, transports audiences back 100 years to enjoy the music of one of the most important composers of the 20th century.

“The piano works of Bartók that I will play come from 1908 through 1926, the same period as the time of the creation of Convocation Hall,” says U of A pianist Roger Admiral.

Béla Bartók: Art and Nature takes place Saturday, Sept. 19, at 3 p.m. in Convocation Hall. For lovers of classical music and those curious to take in a classical music concert for the first time, Roger Admiral is hosting a pre-concert talk at 2:15 p.m. where he will present some century-old photos of Bartók working as a musicologist and play audio of folk music from Hungarian villages, which Bartók recorded more than 100 years ago. 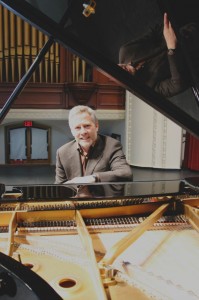 Béla Bartók was active as a composer, pianist and ethnomusicologist in the first half of the twentieth century. The September 19th concert program includes piano music from different parts of his career.

Bartók wrote of his Bagatelles:

“The new piano style of these pieces is a reaction against the excesses of nineteenth-century piano music; it renounces all decorative elements which contribute nothing to the essence of the music, and the technical demands it makes are deliberately kept in check.”

Avoiding decoration and focusing on the essential are two objectives manifest throughout Bartók’s piano music. We can also hear modal harmonies mixed with invented scales, folk melody within colouristic piano figuration, percussive piano articulations, and rhythmic pulses that are influenced by Hungarian language. After the Improvisations of 1920 Bartók did not compose any substantial original piano music until 1926. That was the year of his first radio broadcast, which coincided with a marked increase in international concertizing. In the works of 1926 we see some influence of Arnold Schoenberg, 2-part inventions of Johann Sebastian Bach, and the Baroque keyboard suites that Bartók was editing at the time.

This September marks the 70th anniversary of Bartók’s death, just before he was to return from New York City to Budapest and teach at the Franz Liszt Academy of Music.

Canadian pianist Roger Admiral performs solo and chamber music repertoire spanning the 18th through the 21st century. Known for his dedication to contemporary music, Roger has commissioned and premiered many new compositions. He studied at the Royal Conservatory of Music (Toronto), University of Western Ontario, and the University of Alberta. His main teachers were Virginia Blaha, Peter Smith, Arthur Rowe, and Helmut Brauss.

His CD recording of Howard Bashaw, 15 for Piano was recently released on the Centrediscs label.

For more about the Arts Building’s 100th anniversary, see “Old Arts” Building turns 100 on the Work of Arts blog.