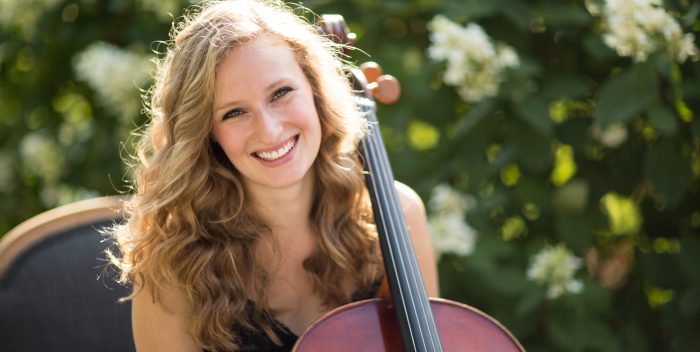 When Kathleen was 5 years old her parents had signed her up for piano lessons, but before she even started she suddenly became insistent she wanted to play the cello instead. She wasn’t entirely sure where her determination to play the cello came from but almost 21 years later, after attaining a Bachelor’s in Music from the U of A and a Masters from McGill, she is still just as attached to it. Since graduating three years ago she has had a number of different music related jobs.

Her first job after graduation was being a freelance musician, which she described as a lot of hard work. She explained when you freelance you are pretty much running your own business and have to rely on your own self-promotion to obtain work. However, she really enjoyed freelancing because it was never monotonous. Every job you work as a freelancer is a little bit different and the hours are never the same. A significant amount of travel was also involved, an aspect Kathleen greatly enjoyed. For Kathleen, freelancing was a beneficial experience because it taught to her be patient and handle rejection without becoming discouraged. It can take a long time to find work when you are freelancing so Kathleen learned to use her down time to practice and improve her skills.

Kathleen then returned to Edmonton to participate in the program YONA-Sistema which is modelled after El-Sistema in Venezuela. YONA-Sistema was initiated by the Edmonton Symphony Orchestra and provides kids with instruments and music lessons. This program also aims to promote social change by using music to teach important community values such as collaboration, respect and mutual compassion. While involved with YONA-Sistema Kathleen taught cello lessons to the kids, along with providing mentorship and support.

Recently she has been offered the primary cello position in Symphony Nova Scotia for the 2017/2018 series! In the past she has been a casual performer for the Edmonton Symphony Orchestra as well as the Calgary Philharmonic. She is excited for this opportunity because when she is on stage performing with an orchestra she is always in awe with the surreal sound they are able to produce.

10 Reason’s You Should Join Summer Band