The academic term is ending on a high note for Rob Curtis, conductor of the University of Alberta Concert Choir. Hot on the heels of Concert Choir’s very successful tour to the West coast, Rob was honoured at the Faculty of Arts awards night on May 6, 2014 with a Graduate Student Teaching Award. I spent a few minutes in Rob’s rehearsal hall this spring, before Concert Choir headed out on the road to Vancouver, and his superior command of choral subject matter, his extraordinary ability to spark enthusiasm in his students, and his genuinely constructive feedback, vividly rang true to me. Rob loves teaching and it shows.

“I’m a huge choir geek and I let the students see that. It isn’t just the musical stuff, the choral technique and rehearsal etiquette, that’s important. A chorus like Concert Choir gives students opportunities to grow in lots of other ways. Team work. Communication. Project management. I really enjoy the people management aspects of it, leading a group and motivating them, building consensus on a musical vision.” 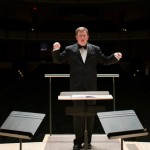 Rob Curtis conducting the U of A Concert Choir and the Madrigal Singers, The Company of Heaven: Britten at 100, November 17, 2013. Winspear Centre. Photo by Ryan Whitefield.

“The choral repertoire has brought me in touch with such fantastic poetry and amazing material that has been really fun to explore.”

How did Rob find his way to the front of Concert Choir as conductor?

“I was taking piano performance as an undergrad, and in my third year, I took an introductory choral conducting course as an elective. I absolutely fell in love with it and found that I had an aptitude for it. I rearranged my schedule so I could take the second level of conducting the next term and by the end of that academic year, I knew that was really where I wanted to go. As a pianist, I did not enjoy being locked inside a practice room alone for five hours.”

The summer between his third and fourth undergraduate years, Rob volunteered as musical director for a community musical theatre Fringe show and that real world experience confirmed that at the helm of the conductor’s podium was his intended lot in life. He pursued his MMus degree in conducting straight away after the completion of his B Mus performance degree in 2003.

For his doctoral thesis research, Rob is focused on the choral works of Malcolm Forsyth, a University of Alberta professor emeritus, composer and conductor that passed away a few years ago.

“The angle I’m taking on that is how Forsyth combined different cultural spaces and influences. A lot of his music for example is preoccupied with the Arctic. You can hear these arctic landscapes take shape in the sound. He was born in South Africa and immigrated to Canada in the ‘60s, so there are a lot of African musical influences in his work as well. I’m searching to see how these things all come together.”