The Studio Theatre rehearsal schedule consistently has a full tech week in the Timms Centre built into the production schedule but it is quite typical for tech time to be far more compressed. For instance, the artists performing in the Department of Music’s faculty composition concert, What Boundaries: nOwAge pneUmas will have their first tech run on the Timms stage Saturday, January 10th. That’s the very same day their show goes up for an audience.

Integrating a dance component within a live music concert certainly adds another layer of complexity, even before you factor in lighting design and video projection or the fact that repertoire is coming off the page into an audience’s ear for the first time. I chatted with UAlberta saxophonist Allison Balcetis, one of the musicians performing at nOwAge pneUmas for her tips of the trade on how to work your way through the process of bringing fresh new music to performance.

It all starts with the score.

“I would always look at the score first. That’s the book that has all the parts stacked vertically, so you can see visually how the parts interact,” says Balcetis.

Before picking up any instrument, pick up a pen.

Similar to how an actor marks up a script, when she is to perform new music, Balcetis says she takes the score and writes out careful notes about her individual part — what she’s doing, who she’s doing it with and how they are interacting.

“Things like here I am playing the exact same thing as the trumpet, so we totally have to lock in. Or here I have a solo. Or here I’m playing background because piano has the melody.”

If you get into more contemporary music where the notation looks non-traditional there is always a map or legend at the very beginning of the score that defines what all the symbols mean.

“There might be a squiggly line and that means something like blow through the horn with just your air and don’t make a saxophone sound.”

Rehearse and prepare on your own.

The reality is most professional schedules only allow for all the artistic elements to get together the day before a performance or even just on the day of the performance.

“What that means is we have to prepare a lot on our own. I study harder than ever on a narrow time line. I prepare my parts really well so that all I have to do is play them over top of my artistic partners. It is always a compact process. So you have to show up prepared knowing what you are doing what and when.”

Be a flexible collaborator with the composer.

Composers often access musicians to workshop new work at various stages of their creative process. For example, UAlberta composer and clarinetist Don Ross has accessed Balcetis as a sounding board over the past few weeks in the lead up to their mainstage concert Joining Forces: New Music from the Single Reed Studios planned for January 30th in Convocation Hall, where the duo will perform the world premiere of We Hum by Ross.

“We had an appointment where we got together so Don could access me with questions about some of his concrete ideas going down on the page,” explains Balcetis. “Things like ‘what happens if you hold out this note and I explore this idea over top?’ I was available to him as a palette to choose from, to try out different things and to take those ideas into his piece.” 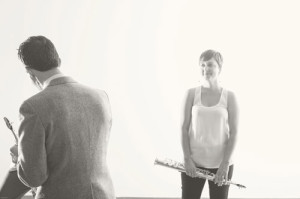 New music today is often very instrument specific. Balcetis says open collaboration between performers and composers is the key to creating the most dynamic new work.

“If you aren’t someone that plays every instrument under the sun for what you are writing for, you really do have to work with other musicians. Howard Bashaw doesn’t play trombone, as far as I know, but he writes for trombone, so he works and studies with trombonists to ask them what their parameters are.”

You can catch Allison Balcetis in performance at the following mainstage concerts:

Ambitious new-generation saxophonist Allison Balcetis unites with fellow University of Alberta music instructor and clarinetist Don Ross to perform an assortment of contemporary works from around the world, including the world premiere of Ross’ new work We Hum
When: Friday, January 30 at 8 p.m.
Where: Convocation Hall
Tickets: $10 student, $20 adult, $15 senior available at the door or in advance from YEG live