How can visual, material and sonic culture forge community identity and bring about social change? Joan Greer, UAlberta professor in the History of Art, Design and Visual Culture and adjunct professor in Religious Studies, aims to unravel the complexities of that question in her new role as Interim Director of folkwaysAlive!, a University of Alberta partnership with Smithsonian Folkways Recordings. I had the pleasure of interviewing Dr. Greer about her recent appointment.

Moses Asch was the owner of Folkways Recordings, a New York record company which began in 1948. This company was very well-known for supporting the music, especially folk music, of different kinds of people, and its idealistic and utopian project was to record all sounds of all peoples everywhere and make them accessible to all peoples. He particularly liked to expose the music and the sounds, including spoken words, of marginalized or radical communities in the United States and throughout the world whose voices had often not been widely heard, such as the folk music and songs of prisoners or people of colour.

During the tenure of Michael Asch as the chair of the Department of Anthropology, Moe Asch started to come up to Edmonton and he liked the music community here very much, including CKUA, and the general vibrancy of what he saw in the musical scene in Edmonton, so he decided to donate a complete set of all his recordings to our center at the University of Alberta and based on that we began the folkwaysAlive! initiative and to work closely with our partner institution Smithsonian Folkways in Washington DC.

For instance, I co-curated an exhibition with Margaret Asch named Seeing the World of Sound: the Cover Art of Folkways Records This cover art exhibition which was held in the FAB Gallery in 2005 has been quite important for a number of further projects we have done. The aim of this center is to support production, recording and dissemination of music and related cultural production, and in the spirit of what Folkways Records did, to try to give voice to peoples that are really involved in the music of community or the music of the people whose voices have been less often heard.

Q: What types of activities and responsibilities do you take on as Director of folkwaysAlive?

I’m responsible for all of the programming and also for our partnership with Smithsonian.

We are currently working on establishing a new partnership with the Memorial University in Newfoundland. I will be working closely with Dr. Beverley Diamond, the director of a center called MMAP that stands for Music, Media and Place. We will be working together with our liaison Dr. Atesh Sonneborn at Smithsonian Folkways. This collaboration will enable us to create a strong tripartite cultural and scholarly exchange, one that connects the east and west of Canada with our partners in Washington DC.

Q: Your main research area is European art of the late 19th century and early 20th century with focus on Dutch and Belgian art and culture. As an art historian how are you well-suited for this position which is related to music?

I’m very issues-based. For an issue such as radical culture and how cultural production works in respect to communities, that is overarching and it can be applied to art and music and I like to bring these things together.

I’m very interested in how, through cultural productions, communities are able to bring about change, create an identity and foster community ties. I particularly look at it from an interdisciplinary point of view combining visual, material and sonic culture.

Q: How does this position fit into your overall career goals?

The aim of the Folkways initiative is very important to the University of Alberta and the university is my community, so by doing this I’m really supporting something that I believe in and attempting to keep the unit strong.

By fostering the exchange of artistic ideas between communities (both on campus and off), this centre can pave the way for the preservation and dissemination of the cultural production – past and present – of diverse of communities. This relates to my research concerning non-mainstream cultural production and to the question of how visual, material and sonic culture promotes community. These ideas, in turn, are underpinned by UNESCO concerns: the idea of preserving and studying cultures, and allowing them to empower communities. 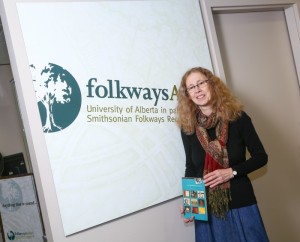 Location: 3-47 Old Arts Building
Hours of Operation: Monday – Friday 8:30 am – 4:30 p.m.
Website: http://www.fwalive.ualberta.ca/home/
If you have any questions related to folkwaysAlive!, please send them by email to: fwalive@ualberta.ca

Joan is a Professor in the History of Art, Design and Visual Culture and a member of the Religious Studies and Science and the Technology in Society Interdisciplinary Programs. Her research concerns late nineteenth and early twentieth century European visual and material culture with a special focus on the convergences of art and design discourses with those of religion and radical politics. Areas of concentration include constructions of genius and of artistic identity, the relationship between artistic and religious discourses, representations of Christ, the mythologizing and reception of Vincent van Gogh, art and design periodicals and the private press movement, and the history and theory of sustainable design. She co-curated and coedited the exhibition catalogue for Seeing the World of Sound: the Cover Art of Folkways Records (2005). Other recent publications include “Representing ‘Dutch Woman’ at the 1898 National Exhibition for Women’s Labour” (2006); “‘Christ, this great artist:’ Van Gogh’s Socioreligious Canon of Art” (2003); “Three Christ Paintings of 1892 by Johan Thorn Prikker: ‘an art of their own flesh and blood’ (2003). In the spring of 2006 she received a SSHRC grant for a project concerning the image of the artist in late nineteenth century Holland.

Q & A with creators of Elephant Wake