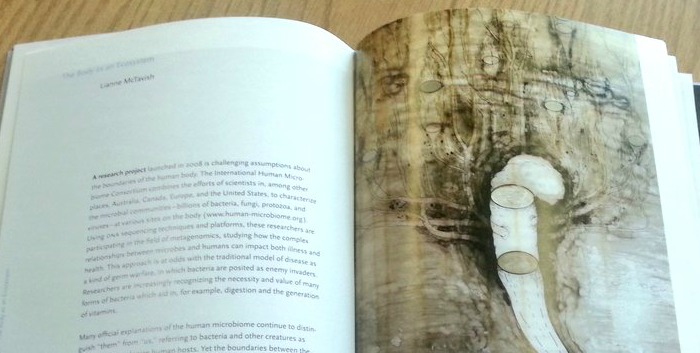 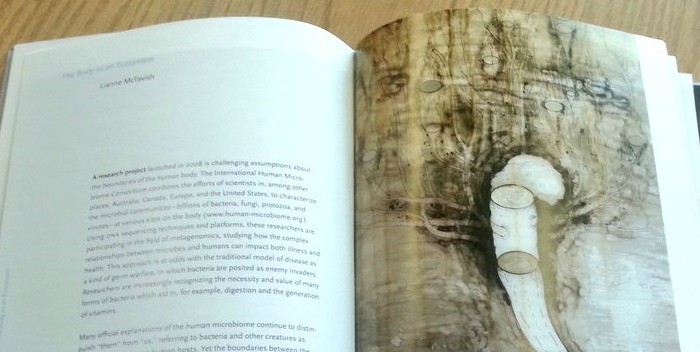 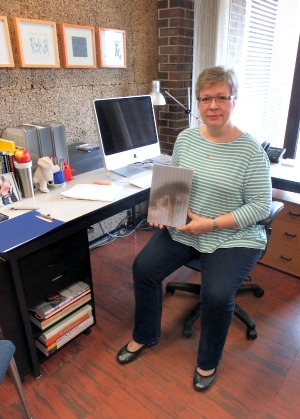 Sue Colberg in her creative studio with the award-winning book The Body in Question(s).

The Body in Question(s) is a true collaboration. It is the final project, in book form, of a creative research effort that has been, at various times, an interdisciplinary symposium, exhibition, contemporary dance performance, and academic think piece. As the title suggests, it is a book that draws upon myriad voices to re-imagine and reinterpret the human body in the 21st century, raising more questions than it answers.

Sue Colberg, Associate Professor in Design Studies, was brought in as the designer of The Body in Question(s), which recently tied for first place at the Alcuin Society Book Design Awards in the category of Prose Non-Fiction Illustrated. The book features art and essays by University of Alberta researchers Sean Caulfield, Royden Mills, Timothy Caulfield, Lianne McTavish, FAB Gallery manager Blair Brennan,  and Edmonton dance artist, producer and UAlberta alumnus Brian Webb. It is a beautiful book,  respectful of the artistic, enigmatic nature of the subject matter and an extension of it.

“It’s a huge endeavour to mount something that involves so many people and so many different spheres of creativity,” says Colberg.

Working with project editors Isabelle Van Grimde, Cristian Berco, and University of Alberta printmaker Sean Caulfield, Colberg was entrusted with bringing all the elements together, which she refers to as the choreography.

“It’s the pacing of the book, the image and text relations, as well as zeroing in on how many photographs we need to space out the texts and make sure that each dancer appears at least once and that everybody’s visual art piece is represented.”

The glassine dust jacket is the first thing you notice about the book. It is translucent, imprinted with a faint, wraparound image of a body. “The subject matter is a bit mysterious,” says Colberg. “I wanted something that provokes questions, something out of the ordinary. Makes you wonder, what’s this about?” 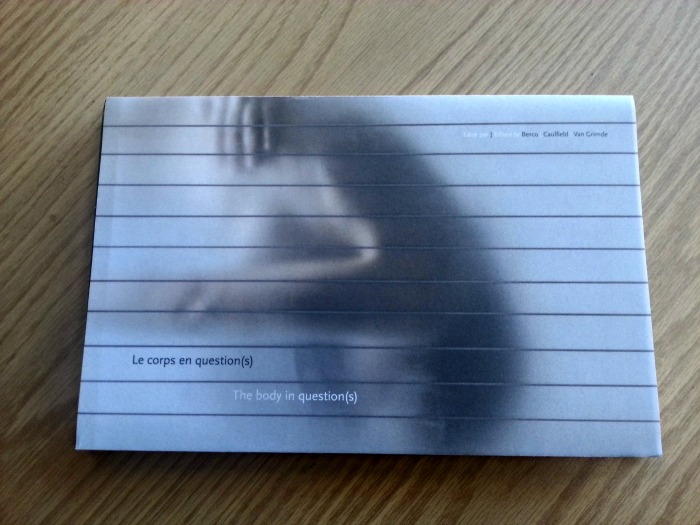 The Body in Question(s)

The text is bilingual, which proved challenging in terms of the sequencing of each language. For Colberg, the solution lay at the very core of the project. “It was so evenly balanced between English and French 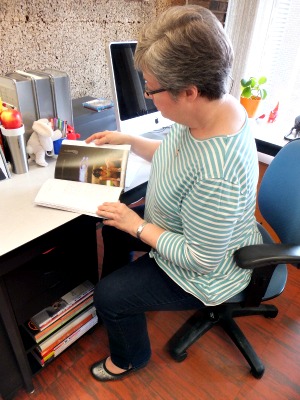 speaking writers, I suggested whomever the writer is, whatever the language they’ve written in, let’s do that first, followed by the translation. It’s unusual because it’s back and forth, back and forth, but I think it’s effective in a way that it respects where it came from.”

The most gratifying aspect of the project for Colberg was the collaboration. “Years ago it would be ‘here are the photos, here’s the text, do your thing.’ Now because the projects have a higher degree of complexity and because there are specialists in each of those areas of complexity – I have richer, better, more accurate material to work from.”

With the on again, off again nature of collaborative work, including all the edits, translations, approvals, and the contrasting schedules of those involved, Colberg completed the final design in about 10 months. For the one-time dancer, it was a labour of love.

“It’s a very intricate process,” says Colberg. “It requires a lot of attention to a lot of things, some to do with content, some to do with form and production and so on. You can produce a beautiful artifact and everybody says it looks really good, but if the stakeholders are not convinced, I feel a designer hasn’t done their job. If the stakeholders come back and say ‘oh my God, that’s fabulous, that’s exactly what I would have wanted if I would have known,’ it’s extremely rewarding!”

Sue Colberg (‘91, MVA) is Associate Professor in Visual Communication Design and a Fellow of the Society of Graphic Designers of Canada. Sue has won numerous national and international design awards for her work and has served on the juries of the Association of American University Presses, the Alcuin Society for Excellence in Book Design in Canada, the Book Publishers Association of Alberta and the Society of Graphic Designers of Canada.

Her research and practice focus on book and publication design, information design, typography and visual identity design. Her clients have included a variety of institutions and scholarly publishing houses in Canada and the United States. Her work has been exhibited across Canada and in the US, as well as in China, Cuba, France, Germany, Japan, Korea, Turkey and the UK. Examples of her work are in the permanent collections of the Fitzwilliam Museum (Cambridge), the Houghton Library (Harvard), the Smithsonian Institution in Washington DC, the Thomas Fisher Rare Book Library (University of Toronto), the Bruce Peel Special Collections Library (University of Alberta) and the Alberta Foundation for the Arts.

Sue has served for many years as the Canadian Representative to Icograda, the International Council of Graphic Design Associations.

Tribes: 3 things I learned about language