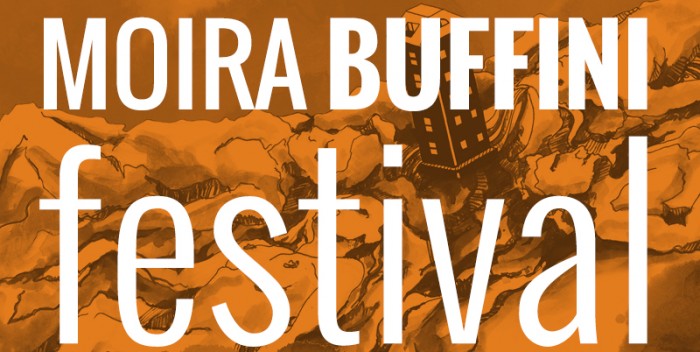 A satirist. A feminist. Wickedly smart and funny. Moira Buffini speaks to this generation like no other playwright. The University of Alberta’s Studio Theatre will be among the first theatre companies to introduce Western Canadian audiences to Moira Buffini with two of the British playwright’s works, Loveplay (Oct. 30 – Nov. 8, 2014) and Blavatsky’s Tower (Nov. 27 – Dec. 6, 2014) hitting the Timms Centre mainstage.

Buffini’s work has proved popular with students in the Department of Drama recently, with a production of Gabriel opening in the Bleviss Laboratory just last week and the BA Drama 457 capstone class’s production of Welcome to Thebes in the Timms Centre’s Second Playing Space in the Winter of 2014.

Who is Moira Buffini?

Moira Buffini, born in 1965, is a British playwright, actor, and director.

The second of three sisters, Buffini was born and raised in Cheshire, England and eventually moved to study English and Drama at the University of London. She then trained as an actor, while developing plays to tour at local Fringe festivals. Her first major success was Silence, which premiered in 1999, and Loveplay followed in 2001. Since then, Buffini has written several plays, including Dying for It (2007), Welcome to Thebes (2010) and the recent tongue-in-cheek women’s political drama Handbagged (2013).

She is the winner of Time Out and Writer’s Guild awards, as well as two-time recipient of the Susan Smith Blackburn Prize, which recognizes outstanding contributions by women playwrights.

Buffini has served as the playwright-in-residence at the National Theatre Studio in London. She is also a well-known writer for TV and Film, and wrote the adapted screenplay for the critically acclaimed 2011 film Jane Eyre.

Buffini’s body of work has distinguished her as a self-aware feminist playwright, which is why the University of Alberta is presenting not one, but two of her plays this Studio Theatre season. This unique showcase of Buffini’s work intends to celebrate the spirit of feminist writing and its necessity in today’s theatre. Canadian audiences have yet to be fully introduced to her plays, and the festival is a way to inspire conversation about this celebrated playwright. Buffini’s writing is fresh, relevant and delivers some hard-hitting lessons in a light-hearted fashion.

Presenter: U of A Studio Theatre
Event Title: Moira Buffini Festival
Featuring:Loveplay by Moira Buffini, October 30 – November 8 at 7:30 p.m. Matinee November 6 at 12:30 p.m.
Blavatsky’s Tower by Moira Buffini, November 27 – December 6 at 7:30 p.m. Matinee December 4 at 12:30 p.m.
No shows on Sunday.
Venue: Timms Centre for the Arts, University of Alberta
Single show tickets: $11 student, $22 adult, $20 senior available online now at TIX on the Square and at the Timms Centre box office one hour before each performance.
For more information see www.ualberta.ca/artshows .

In the Studio with Agnieszka Koziarz