A series of pop up exhibitions across campus Wed. Dec 3

[Updated December 4, 2014] In case you missed it, the students from Art History 215: China Art Now curated and installed pop up exhibits across the University of Alberta campus from SUB to CAB, through the Old Arts Building, Humanities Building, HUB and FAB during the lunch hour Wednesday, December 3, 2014. 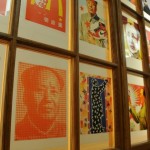 Detail of the art installation in the Old Arts Building, at the University of Alberta Dec 3, 2014. 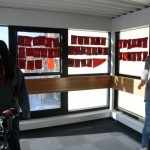 The goals for the project as outlined in The Long March @ U of A manifesto were:

[Original post December 2. 2014] The Long March (1934-35) was a 9000 km military retreat by the Chinese Communists lasting 370 days. The route passed through some of the roughest terrain of western China and began Mao’s ascent to power. In 2002 a commune of artists from Beijing retraced the route, engaging with villagers along the way through  performances, lectures, and exhibitions.

The Long March @ the U of A is a project brought to you by your student comrades in Art History 215: China Art Now and will attempt to emulate this event in a modern sense – by asking you to make the march through campus along a path featuring a series of pop up exhibitions. The Long March Project @ the U of A  represents bringing art to the people and the journey of seeking knowledge through art.

Long March @ the U of A Map