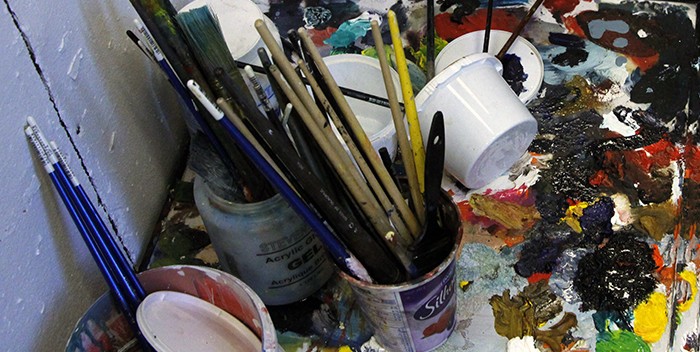 Even though Knoxville, Tennessee is 3,500 km away from Edmonton, almost all of the University of Alberta graduate printmakers gathered there in late March, 2015, joined by current and former U of A instructors, professors, and undergraduate printmakers to attend this year’s Southern Graphics Council International (SGCI) Conference.

Like previous years, the University of Alberta’s strong presence at the largest printmaking conference in the world was unmistakable. We were all there to represent our school’s amazing printmaking program and, of course, to support the SGCI Excellence in Teaching Award recipient, Professor Emeritus Walter Jule. 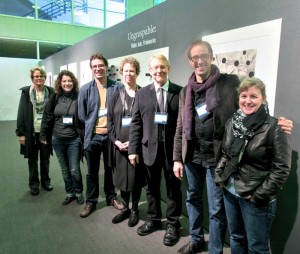 The University of Alberta was strongly represented at the 2015 SGCI conference in Knoxville.

Bright and early after a late night touring Knoxville’s favorite art-scene hangouts and gallery events, Walter was set to receive his award and give the keynote address. While we were all a bit tired, Koichi Yamamoto, Professor of Printmaking at Knoxville and Walter’s former student, rallied the audience in what he promised would be a keynote address like none other.

He described Walter’s style of using metaphor when speaking with his students as perhaps a bit perplexing at first, but ultimately culminating in a “Walter moment:” when it dawns on the students exactly what he meant for them to discover all along. Not one to disappoint, Walter took to the stage to accept his prestigious award and then proceeded to give a theatrical and captivating address—ensuring no one in the audience was lethargic any longer. 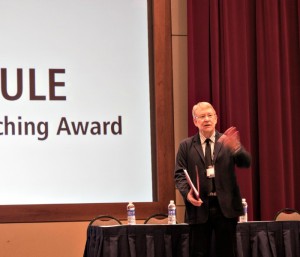 He then explained that the night before, a mysterious visitor had slipped a new speech beneath his door and he would read this one instead. It told the tale of the future SGCI Conference of 2020 held in Tokyo, where four attendees walk into a bar: a Canadian, an American, a Polish person, and a person from Japan. While ordering drinks and reflecting on the state and relevance of printmaking, an elderly man walks in and imparts some knowledge on the young, melancholy artists. He explains the rules of survival all artists must abide by to be successful (or how to continue creating art without becoming insane or crippled!)

Organized as a series of catch phrases, Walter’s points were often more complicated than that, and always alerting us to pose more questions. These rules ranged from acknowledging those artists that came before you and passing on your ideas to others, reveling in the history and continuous evolution of the printmaking process, and paying close attention to not only what you make, but how your body moves and mind rests, as these things will ultimately inform your practice.

All of Walter’s tips seem to point to a sentiment that all printmakers know to be true: we are a community, and the best ideas are those shared and incubated.

Although Walter is no longer our professor, his legacy lives on through his students, many of whom are now professors themselves, and the day when all of us in the audience will have our own “Walter moment.”

Keep an eye out for the improbable. Be guided by it.

How we enter art practice shapes our engagement.

As we approach a Japanese tea house, there is a stone wrapped with twine. This reminds us we are not only changing our physical pace but the state of our minds.

We are all teachers and students.

We learn as much from objects (things) as we learn from people.

There are two ways to erase a deKoonig.

Starting with the story of how, in 1953, Robert Rauchenberg acquired a drawing by deKoonig with the intention of erasing it, the other way to erase any artist is to fail to acknowledge our indebtedness to them.

It`s a relay race, not a boxing match.

Science, art, culture are cumulative. We are always receiving and passing on.

History and the Boy Scout Oath.

There is a necessity for balance between head, heart and hands. We are always swinging wildly from one to another.

This is the story of Ikkyu’s answer to the question, “What is attention?”

Undertake a life-long activity which has no goal except self-observation. Running, music, yoga… concentrated work that shows us what our programmed thought patterns are. The only way to become free from the tyranny of received ideas is by being able to separate the teaching from the teacher, the nutrition from the taste.

Walter Jule’s SGCI conference address will be broadcast April 18 at 2 p.m. and May 2 at 2 p.m. (MST) at: www.ctvknox.org 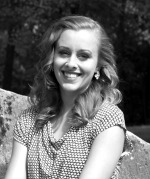 Darian Goldin Stahl completed her  Master of Fine Arts in Printmaking at the University of Alberta in 2015 with her final visual presentation, HABITUS, an exhibition of art work that fuses her sister’s MRI scans with her own bodily impressions. She has been a primary instructor at the U of A in printmaking and fundamentals. She received her Bachelor of Fine Arts in Printmaking at Indiana University Bloomington in 2007. Her research includes living with chronic illness and anxiety over the failing body. Darian has exhibited in numerous galleries around the world, including Colorado, Ottawa, Alberta, British Columbia, Georgia, Indiana, Boston, Slovakia, Egypt, and China.

Brad Necyk’s Of Other Spaces