Meet Quezi. Quezi is short for Quetzalcoatl, the feathered serpent god of the Aztec people, a name and title he will grow into. He will become their protector, their feathered colour dragon. But that civilization doesn’t even exist yet, and Quezi is still a baby; thousands of years old, yes, but that’s nothing for a dragon. He is still struggling to learn to fly, and yet carries the weight of the world on his small shoulders. Like all god dragons he is very quiet; he knows his role will be to listen more than answer.

I designed and made Quezi in the spring 2015 puppet-making class offered by the University of Alberta Department of Drama, and taught by a recent graduate of the MFA in theatre design program, Zsofia Opra-Szabo.

Quezi wasn’t my first idea for a puppet. At first, I wanted to make Kamala Khan AKA the new Ms. Marvel, and play around with her “embiggening”, her superpower that allows her to morph her body, particularly its size.

Zsofia suggested I create my own character, and make the Kamala puppet as a personal project.

So it was back to the drawing board for me – or rather, to the plasticine. I tried sketching something and seeing where it went, but I really do work a lot better in three dimensions, so it wasn’t long until I grabbed the plasticine. There wasn’t enough of a single colour to make a ball of a size I could comfortably work with, so I mashed a bunch of colours together, and started sculpting, thinking colour choices would come later. The resulting face was this: 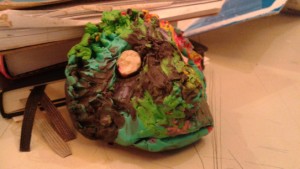 Well, I fell in love with the multicoloured look very quickly, and it wasn’t long until I’d found his name and species: Quetzalcoatl (or Quezi) the dragon. The sketch for the body came shortly afterwards.

Once we knew what we wanted, we all made technical drawings of our puppets, to figure out the exact shapes of all the pieces and how the puppets would move. When Zsofia saw the full-size technical drawing, she said she’d have to get more clay. The next step was to sculpt the heads of our puppets out of clay. I’d done a lot of pottery and hand building in the past, but this was my first time working with 22 pounds of clay. Quite the workout.

We cut our clay heads in half (which is actually really scary, no joke) and placed them in appropriately-sized containers to create the moulds. I had to use a bin I’d used for apple-bobbing.

Then we made and poured dental plaster over both halves of the head, and waited a few days for it to dry before taking the clay out. Then I cleaned the clay residue from my mould, coated it in soap, and did ten layers of paper maché in each half of the mould. 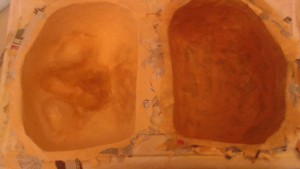 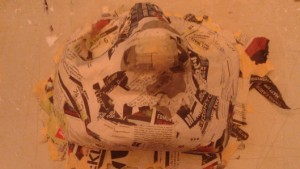 Following that, we had a couple of weeks of carving styrofoam with exacto knives and sandpaper every morning to create the many body pieces of each puppet.

When the styrofoam was all carved, we covered each piece in three layers of paper maché. We also assembled the two halves of the puppet heads at this point, and stuck the dowel that would allow us to control them in the back of their heads. 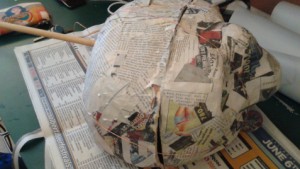 After that I added the feather texture to Quezi by putting scrunched-up pieces of paper towel dipped in a glue-and-water mixture all over his body. 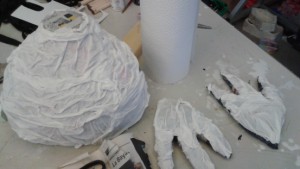 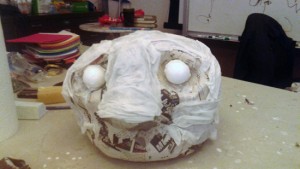 Then, one of the final steps: assembly of all the parts! This involved using kebab skewers to make holes in the pieces, and stick rope through them. As far as I’m concerned, Quezi was born on the day all his pieces were strung up together. 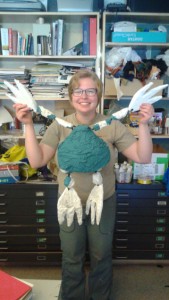 All that was left was to paint and dress our puppets. 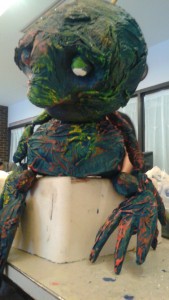 We finished off with a well-attended and enthusiastic design presentation.

And in the future? Well, I plan to take a puppeteering workshop with Old Trout Puppet Theatre, build more puppets, including four for a play I’m writing, and let Quezi participate in Daunia del Ben’s MFA thesis show next spring. And I did almost pose with Quezi for my graduation pictures, but he’s not a very cheerful-looking puppet, so I eventually posed with Barnabé, the hand-puppet I got for my last birthday: 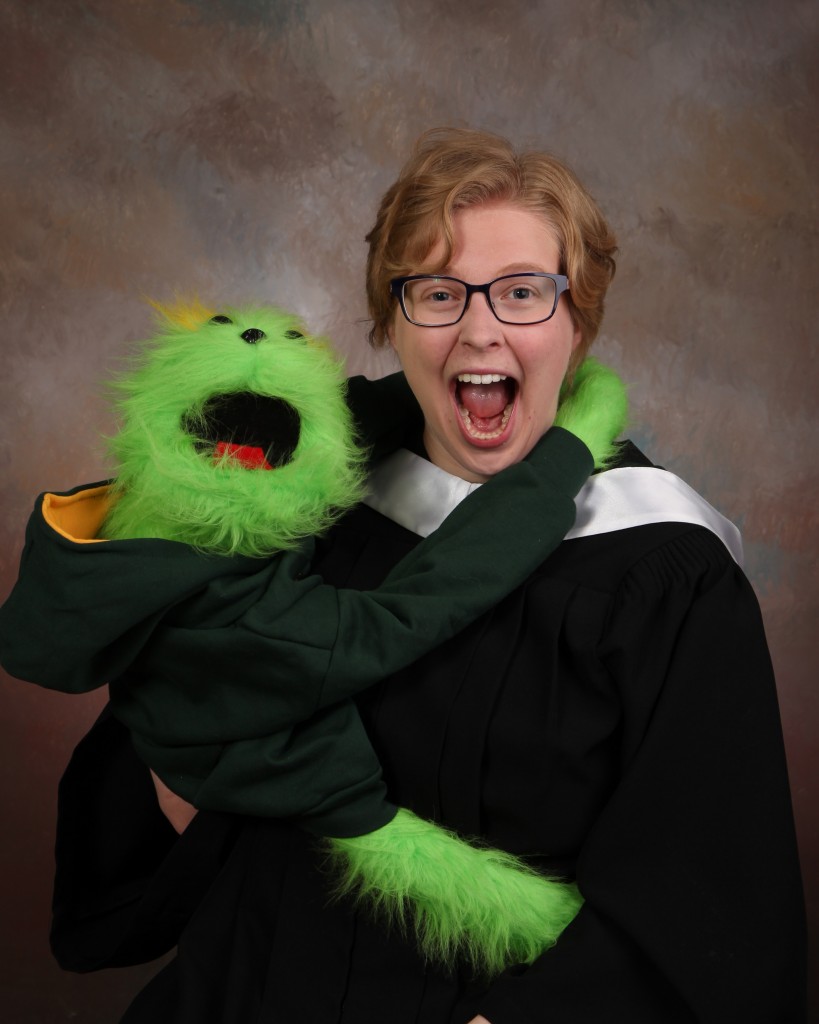 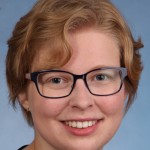 Alodie Larochelle is one online course away from graduating with a theatre and creative writing BA from the University of Alberta. She is a writer, photographer, lighting designer, sometimes performer, and clown. She is now beginning to also explore Commedia dell’arte and making and using puppets. She has worked on several shows with Théâtre à l’Ouest, ABBEDAM Productions, the New Works Festival, L’UniThéâtre, and Northern Light Theatre. Follow her blog, alodielarochelle.wordpress.com to try to keep up with her!