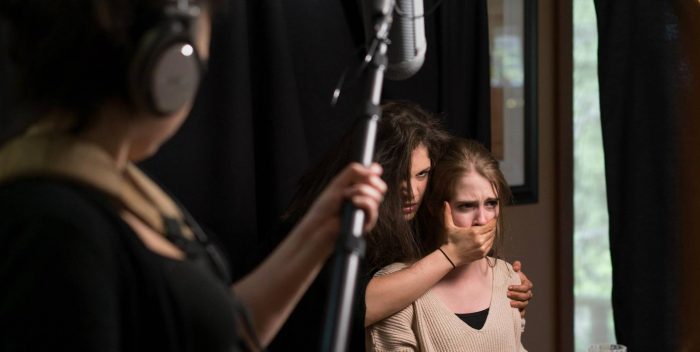 There’s nothing more satisfying than a story about someone who has discovered what they love and committed to fearlessly chasing after it! Well, that is exactly the case with U of A Alum, Rachel Soong, who has developed a successful career from her two passions: music and film.

Music has been a large part pf Rachel’s life for as long as she can remember. Although she hasn’t always known what she wanted to be when she grew up, she was always certain it would involve music. Similarly, she remembers being in middle school and telling her Grandma she thought working on film soundtracks would be an amazing job.

While in her first year of a combined BMus/ BEd degree, Rachel received a piece of advice which she held onto for the next seven years. The advice was, if she was really passionate about film then she should consider attending the Vancouver Film School. Well, after completing her undergrad and then a Master’s degree at the U of T, she did just that!

Presently, Rachel has graduated from the Vancouver Film School and happily pursuing a career in sound design and composition. Sound design is an immensely diverse field where Rachel has the opportunity to occupy several roles including boom operator, production sound mixer, dialog editor, sound effects editor and music composer. In sound design there are two major categories: production sound, which is capturing sound that occurs during filming; and, post-production sound, which is everything in terms of sound that occurs after the film has been cut. Rachel admits her favourite of the two is post-production. She shares “it’s extremely rewarding to watch a film and know you have paved the path for the audience’s emotional connection.”

Rachel’s background in music helped put her ahead of the game in film school and has been extremely beneficial for a career in sound design. She explains it’s incredibly useful to already have a trained ear and understand concepts such as balance, rhythm and conveying emotion to an audience. Completing a music degree also equipped her with the skills for self-discipline as well as working independently. She explains her experience with music has provided her with “the ability to step away from the little details and see the overarching story” behind what she’s working on.

Rachel has worked on several interesting projects but one upcoming assignment she is especially excited for is a short film about a passed down family technique for making Chinese pulled noodles. She’s particularly excited for this project, not only because it’s a unique idea, but also because the film will be paired with live traditional Chinese music. Some projects she’d love to see in her future include working for Pixar or DreamWorks on an animation project, as well as experiencing one of her film scores performed by live musicians.

Previous articleTalented U of A Students Share Their Experiences Performing With the National Youth Orchestra.