As Julie-Ann Mercer wandered through Fresh Paint: A Snapshot of Painting in Edmonton, an exhibit at the University of Alberta Enterprise Square Galleries, she wondered how she can put into practice what she’s learned throughout her BA in Art History. Fresh Paint has been held over until April 26, 2014.

Have you watched the BBC’s television show Sherlock? The main protagonist, Sherlock Holmes, has the ability to size a person up in a matter of minutes. He quickly notices minuscule details about people’s demeanor, clothing and accessories. With only these clues, Holmes is able to accurately deduce their overall character and situation in life. Some characters find Holmes’ ‘party trick’ to be intrusive and unwelcome, whereas others appear impressed by it.

Similar to Holmes, art professionals have the ability to impress audiences with their knowledge and deductions when they interpret art. Once they have tweezed out meaning from every element in the artwork, they piece their analysis back together to convey the work’s overall message. If you’ve had the opportunity to attend a tour at an art gallery or take part in a survey art history class, I’m sure you’ve seen this first hand. Their narration about the artist, the artwork’s formal elements and its historical context slowly unfolds the significant factors that define the piece.

I am guilty of a similar ‘party trick’ when I recognize artworks that I have carefully studied at some point in my art history degree. My ‘audience’ is typically my boyfriend, who patiently humors me as I re-tell facets of information that I remember reading about or discussing in class. What I interpret when I look at works of art isn’t a reflection of what I think; instead, it’s an echo of what other people have asserted.

If I’m taught in university to remember what other people think, how do I take that knowledge and make it my own?

This question was present in my mind when I recently visited the University of Alberta’s Enterprise Square Gallery to view one of their current exhibitions, Fresh Paint: A Snapshot of Painting in Edmonton. Instead of reading the exhibition’s information panel as the only authoritative voice on art, I thought critically about what the curators were suggesting through their carefully crafted paragraphs on the theme of the show. Both curators assert in the information panel that they found painters who remain “passionately committed” to their discipline by not experimenting with other forms of media. The curators argue that this passionate commitment enables the artists to advance artistic practices in painting. As I walked through the exhibition, I studied each painting with the curators’ words in mind. I looked at the artwork in terms of its technique, colour, texture, and aesthetic. Repeatedly, I would stop and think: “how is this work advancing painting?” 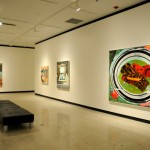 I left the gallery with a lot of ideas on why the curators found the paintings avant-garde. Unlike the confident Sherlock Holmes, I wasn’t able to pinpoint one exact reason. But, I spent the afternoon walking around the gallery, slowing looking at each artwork to try and figure out its significance for myself. Even though art professionals possess a form of a ‘party trick’ that enables them to deduce aspects about art that you wouldn’t normally see for yourself, I don’t think we can fully learn from the information they tell us unless we critically think about what they are trying to say. With that, I encourage you to take a trip downtown and look at Fresh Paint for yourself. Do you think it advances painting?

Julie-Ann is a fourth year University of Alberta student in the History of Art, Design, and Visual Culture. She will be completing her degree in April 2014. She always dresses for the weather and is not one to turn down a pastry or a glass of wine.

In the Studio with Emmanuel Osahor