Playwright Moira Buffini’s descriptions of a set are minimal in her Blavatsky’s Tower, but the metaphysical, otherworldly nature of the play sparks special interest from the designers who attempt to stage it. About a narcissistic architect’s attempts to shape his domain into a Utopia, the play follows a blind visionary named Blavatsky and his family, secluded in a decaying tower as they face mortality. For UAlberta MFA Theatre designer Robyn Ayles, the challenge is to recreate a sense of claustrophobia and sickening isolation, so that the audience is looking in on an eccentric world of consensual oppression and skewed morality. We talked about about her design process to create the set and lighting designs for Blavatsky’s Tower. The show opens this Thursday, November 27.

Q: What was your design process like? What were you inspired by?

Sandy Nicholls (director) and I looked at a lot of visual material in our research. I was inspired by Brutalist architecture. The script does not specify Brutalist architecture but I think it underlies everything in the narrative. How the old man Blavatsky talks about his tower, and how his children refer to it is very reminiscent of Brutalism. They seem to be surrounded by it.

Both Sandy and I came up with images of broken towers. Sandy was drawn to the image of a tower featured on Homeland (the reference is to the Tower of David, a to-date unfinished and abandoned commercial skyscraper located in Caracas, Venezuela). Similarly, I was inspired by a tower in Beirut, Lebanon called Burj-Al-Murr. This building is broken down and derelict (it was caught in the middle of civil a war and occupied by militia), but it cannot be destroyed anymore, so it just stands there.

I read the play again and again, and listened to the description of where the characters are, and how they describe it, how they find it beautiful, overwhelming and crushing.

I searched images that might make me feel something, using terms like “dark tower” as keywords. I let myself wander through images and finally discovered architect Louis Kahn (1901-74). Kahn works with a lot of straight lines and edges. He designed buildings such as the Parliament in Dhaka, Bangladesh and the Medical Wing of the University of Pennsylvania.

I was asked to take a look at the stage rake used in the set for Loveplay (also written by Buffini). It is slanted towards the audience, which gives the impression of instability and brokenness. We decided to use it for Blavatsky’s Tower too. It represents the top of the tower, a place usually thought to be open and overlooking a vast landscape, in an enclosed way. These characters are at the top, yet they can’t see the world around them.

I have not worked extensively with projections, so that was new and exciting for me. We wanted the building to be its own character, and it was a challenge to use projections to depict this. Both sound and projection comment on the play’s action, and the building breathes and moves.

The tower is Blavatsky’s first child, and the projections communicate the building’s desire to protect and care about the family, yet it is also afraid to let them go. There’s a huge irony to this tower being declared a historic building, and I love the idea of how disappointing it would be to Blavatsky that it isn’t beautiful. He wanted it to be a thing of beauty, which it is, but it is also ugly at the same time.

Lights and sets for U of A Studio Theatre production of Blavatsky’s Tower, designed by Robyn Ayles. Photos by Ed Ellis. 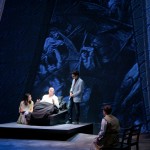 Q: What can the audience take away from the design in this show?

I want the audience to see something that is both beautiful and ugly, terrifying and uncomfortable. Blavatsky’s Tower is such a dark comedy — it is funny but also full of broken characters. We want to communicate that at the end of all this, there is still hope.

Robyn is a second year UAlberta MFA design student, from Okotoks. Recent designs include costumes for Theatre Mont Royal University’s production of Rosencrantz and Guildenstern Are Dead, set design for The Shakespeare Company’s A Winter’s Tale, and set and costume design for Theatre MRU’s productions of Brighton Beach Memoirs and Uncommon Women.  She was an Associate Professor at Mount Royal University until spring of 2014.

Presenter: U of A Studio Theatre
Event Title: Moira Buffini Festival
Featuring:Blavatsky’s Tower by Moira Buffini.
November 27 to December 6 at 7:30 p.m.
Preview Wednesday, November 26 at 7:30 p.m.
Matinee Thursday, December 4 at 12:30 p.m.
No shows on Sunday.
Venue: Timms Centre for the Arts, University of Alberta
Single show tickets: $11 student, $22 adult, $20 senior available online now at TIX on the Square and at the Timms Centre box office one hour before each performance.