How well do you know the most familiar face at the Timms Centre for the Arts?

The Timms Centre for the Arts at the University of Alberta in Edmonton.

It’s the most wonderful time of the year at the Timms Centre for the Arts. Wonderful, of course if you like busy. Just talk to David Prestley, Timms event coordinator and theatre administrator, that is if you can catch up with him and his front of house staff as they run their tails off throughout December hosting special holiday parties and end of term event bookings.

Not only is the Timms home to U of A Studio Theatre mainstage season of six plays and the Department of Drama’s performance activity in the Second Playing Space, it is also a bustling performing arts venue for community organizations like Citie Ballet and the Brian Webb Dance Company. As one of the University of Alberta’s flagship event hosting facilities, an average of 24,500 guests come through the Timms on any given year, with one or more spaces in use 300 days a year.

As the face of the Timms Centre, David is a tremendous ambassador for the University of Alberta. He always goes the extra mile to provide the most outstanding service possible to Timms patrons.

He volunteers at U of A’s Open House and Alumni Weekend. He picks up dropped volunteer shifts at Studio Theatre. He cleans the lobby, theatre and washrooms on the weekends to keep the Bee Clean charges to a minimum. He shops for unique wines and beverages for adventurous Timms rental clients on his own time and often purchases unique flower arrangements for special events at the Timms out of his own pocket. As Julie Brown (Drama’s administrative professional officer) put it when she nominated him for a 2014 Faculty of Arts staff award:

“David does all this with class and grace and a wicked sense of humour.”

Here are 5 things you oughta know about David Prestley:

1. Now a front of house king, David previously had an illustrious career on-stage as a professional opera singer.

He started singing at six years old in community choirs. He performed as a kid with New Generation Chorus on Vancouver Island and was invited to join the British Columbia Boys Choir. He toured Holland for the first time at 12 years old and was featured in recordings released by the Dutch Philips record label.

“Somebody’s voice changed on the trip and I got the opportunity to do the solos on the recording.”

At post secondary, he was interested in the sciences and thinking about becoming a veterinarian but choral singing drew him into the opera world. By 1988 he made his debut in Europe with broadcasts on German radio. He worked steadily with Vancouver Opera, touring shows to schools and involved with several world premieres on the mainstage, delivering 200 – 300 performances a year for six seasons. 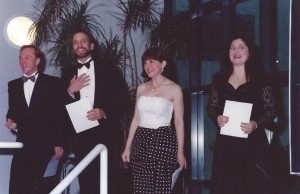 David Prestley performing at the Vancouver Opera Tour launch in 1993.

2. He’s perfectly at home in the booth.

David worked as a stage manager for opera companies and festivals. He was tour coordinator for Piano Six.

3. Not only is David a character tenor, he’s also a horse whisperer.

Although it may be hard to picture the E-town urbanite who likes to ride his bike across the High Level Bridge as the same kid who spent hours shoveling manure in a barn, this snappy dresser did grew up as a farm boy in a little town just outside Nanaimo called Lantzville. He milked cows and rode horses on his godparents farm nearby and was able to convince his parents that he should have a horse of his own when he was about 12. He rode horses competitive in English and Western styles.

4. The host with the most also knows how to raise cash.

“Working as a freelance artist, I was dipping my toes into a lot of ponds. I liked getting exposure to all aspects of the industry.”

Early in the 1990s when working to launch the Arts Alive Festival in Nanaimo, David cut his sponsorship negotiation teeth by persuading a couple of local car dealerships to bring in one of his former high school classmates to perform, a rising jazz star at the time by the name of Diana Krall. You might of heard of her?

“I get really jazzed about talking about projects and how the project can impact people…what it can bring to the community and trying to find out who would be interested and might be able to support it.”

David has enjoyed professional fundraising stints for the United Way and a theatre company in Prince George. Now as Timms Events coordinator he develops strong relationships with is suppliers, garnering price reductions and sponsorship partnerships with most of them.

“I’m a foodie. I love eating food. I love making food. It is about celebrating food and life, that’s been a big part of my life since I was a child.”

That passion for entertaining has spilled into his professional work life, first on-stage and now in his role as Event Coordinator at the Timms.

“I love putting together events, collaborating with caterers and clients to create menus and wine pairings. All that fun stuff.”

UAlberta kicks off 2015 concert season with What Boundaries: nOwAge pneUmas